A (Brief) History of Railroad Safety Crossing Signs and Signals

You’ve probably seen their flashing red lights as you approach the crossing. Maybe you’ve raced to beat the gate arm as it comes down to block you from getting smacked by several thousand tons of rolling freight; next time, don’t do that. Or you may have even heard the dinging bells as you pulled up to the gate, as long as you had your radio turned down or weren’t talking on your cell phone. We’re talking about crossing gates and signals designed to keep you safe at a railroad crossing, that is as long as you follow the proper safety rules and procedures. Many people are hurt and even killed every year because they are negligent of their surroundings when it comes to railroad crossings or feel that it is an inconvenience to wait for a train.

Always follow the railroad signals but also be aware of your surroundings. If you see a train coming and the signals are not working; stop, and let the train pass through. Also, call the railroad responsible for the crossing. The numbers and the exact location are always posted near the signal apparatus. Your efforts will be greatly appreciated by many.

Now a little bit about the history of railroad crossings and signals.

Early on in the first few decades of railroads, crossing gates and signals were not needed. However, as railroad tracks became more numerous and trains began to run faster. As the United States became laced with railroads in the second half of the 1800s, it soon became apparent that safety warning signs and signals should be set up to protect people who wanted to cross the tracks.

Originally, various signs were posted at crossings, and occasionally at the busier ones, a watchman may be posted to warn of approaching trains. This second option would prove a little costly and largely inconvenient at times. Something further needed to be done.

The first U.S. patent given for a railroad crossing gate dates back to August 27th, 1867, and was awarded to J. Nason and J.F. Wilson of Boston Massachusetts.

At that time, crossing gates were hand-operated by means of a crank mechanism. The gates were lowered and raised by a means of cables or chains running through underground piping from the gatekeeper’s crank station to each individual gate at the crossing. Generally, each crossing had four separate gates. Due to the extreme length and great weight of the wooden gates, they had to be counterbalanced by very heavy cast-iron weights at their bases. As if that wasn’t enough, mother nature added a few obstacles as well. Snow or rain could cause the wooden gates to become even heavier than they normally would be. Additional weight could be added to the massive counterweights as needed by the gatekeeper, who would place cast-iron disks, each weighing approximately 20 to 30 pounds each. As a train approached, the gatekeeper would crank the gates, and these would remain down until the train passed safely. Hopefully, they ate a good breakfast and were well drilled in the art of both clockwise and counter-clockwise cranking motion.

The gatekeepers often had their own little shanty to hang out in-between runs. Some were no bigger than an outhouse whose only purpose was to block the wind while others may have been spacious enough to include a few chairs, a desk, and a wood stove. 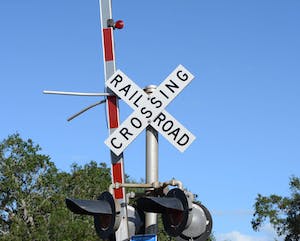 By the early 20th century, the use of “crossbuck” signs, the boards forming an “X,” became very common. The design formed the basic warning sign still in use today but vastly improved with automatic warning advances. In the mid-1920s, sign makers began using road reflectors called Cataphote reflectors or “cats eyes” on crossbuck signs to make them more visible to drivers at night. These were used through the mid-1940s when reflective buttons became common. Eventually, reflective sheeting became popular.

There was still the problem of having a person sit in a shack to raise and lower the crossing gates. Along a line of rail, there could be many crossings. A person at each one, even if paid a lower wage, eventually added up to a lot. So, the railroads were hunting to look for a less labor-intensive and cost-effective method to control automobile and pedestrian traffic at the crossings.

In the second quarter of the 20th-century, automatic gates began to appear. The first automatic crossing signals were bells mounted atop poles. They were activated when a train entered a circuit where the rails were insulated to confine the electric current to a designated piece of track. The current flowed through the steel wheels and axles of the train, short-circuiting electricity to a relay that needed the power to hold the electrical connection apart that kept the bell off. When the electricity was diverted through the train, the path of least resistance, instead of the relay connection, the contacts connected, and the bell rang. The electric bell idea was quickly expanded to include a swinging round sign with a red light hanging from an arm on the signal pole to simulate a flagman waving a red lantern. The “Automatic Flagman” signals were soon dubbed “Wig-Wags.” An example of one can be found here at the National Railroad Museum in Green Bay, WI. 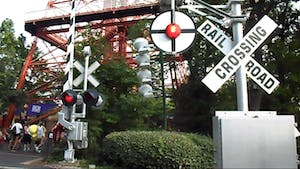 Eventually, the Wig-Wags gave way to the alternating flashing red lights mounted as part of a cross-buck sign, and often with the crossing gates as well.

Another interesting fact is that originally there were four crossing gates, two on each side to prevent oncoming traffic from either side of the crossing. Later is was reduced to two gates, being only on the oncoming side of each of the crossings. With many people taking this as a sign that they could drive around the gates, many more accidents and fatalities have occurred. This has brought about the question as to whether the four gate standards should return in all cases to prevent more accidents.

In addition to signals and gates at the crossing, it is the motorist, bicyclist, or pedestrian’s responsibility to also look for and listen to see if a train is coming, regardless if the signals are working or not, every time they cross the tracks. Always remember to STOP, LOOK, and LISTEN! It’s better to stop and be late than to run through and test fate. So the next time you are at a railroad crossing after you have stopped, looked, and listened, sit back, relax, and take in the sights and sounds of these majestic pieces of American history. It’s not every day that a show is free.