Adventures of a Circus Clown

There is a good chance you’ve seen Jeff McMullen if you’ve ever attended an event at the National Railroad Museum. A magician, a clown, a consummate entertainer, McMullen has led a fascinating life.

At the age of 4 years old, he knew he wanted to become a clown. While most people outgrow their childhood dream job, McMullen never did. Instead, he focused on ways to make his dream come true.

From self-taught to a clown college graduate, we find him entertaining, and we hope you enjoy a look into this circus clown’s adventures.

When was the first time you performed as a clown?

I performed in theater throughout high school, but the first time I was a clown was for my Eagle Scout project for the Boy Scouts of American in 1976 – 1977. I was self-taught in juggling and performing basic magic acts, so I contacted a couple of the local hospitals and arranged visits to the pediatric wards. The next thing I knew, I was being asked to visit other wards, including the maternity ward, to visit and take pictures.

There was something special to it. I’d never felt anything like it. The experience was extremely rewarding, and I knew I wanted more.

Did you need special training to become a circus clown?

Today’s clowns are lucky. When it comes to being self-taught they have YouTube to start honing their craft. For me, it was a lot of practicing and learning from making mistakes. However, after graduating, I had a really unique opportunity. Ringing Bros., and Barnum & Bailey had opened up its first clown college in Florida. There were around 6000 applicants to the program and only 63 got in. I don’t remember what I wrote in my essay, but they wanted me.

I was the only person from Wisconsin, and on the day I arrived, I saw how ‘out-classed’ I was. After I got out of the cab, I saw others practicing. They had professional juggling equipment, monogrammed equipment bags, doing tricks I hadn’t even seen before. So there I was, a young man with a plastic shopping bag containing three tennis balls to juggle and wanted nothing more than to get back in the car and go back home. Instead, I forced myself to put on my ‘big-boy pants’ and go forward. Being a professional clown, this is what I’d always dreamed of becoming. Twelve months later, I graduated from clown college with a contract to join the Ringling Bros., and Barnum & Bailey Circus, the Greatest Show on Earth. 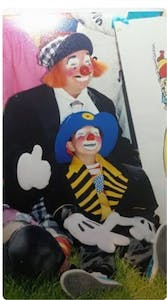 Jeff McMullen and his son

How long were you with the circus?

I was only with the circus for one season in 1979 through 1980. It didn’t take me long to realize the constant traveling and hectic schedule wasn’t for me. However, it was one of the most important stepping stones in my career.

After the circus, I returned home and attended the University of Wisconsin-Oshkosh (UW-O), where I got my undergraduate degree in television and film production. On the day I graduated, my wife, Debbie, and I moved to Arizona, where I would spend the next five years playing the role of one of the most recognized clowns in all of the world—Ronald McDonald. I would make appearances throughout Arizona and Southern California for the McDonald’s Corporation.

Like the circus, it was a great experience. Still, there came the point where I didn’t know if I was getting the laughs and the reactions because I was Ronald McDonald or if it was because of what I was doing as a performer. I needed to know the answer to that question, so we packed up the family and headed home to Appleton, Wisconsin, where I would spend the next few years completing my master’s degree in speech theater.

A week after graduation, I found myself rejoining the Ringling Bros., and Barnum & Bailey family yet again, but this time as a teacher helping to open a new clown college in Japan. Living and working in Japan for a year allowed me to share everything I had learned during my career.

After returning home, I would receive one of the most prestigious invitations ever. I was asked to perform for the Easter Egg Hunt at the White House in Washington, D.C. I will never forget the encounter I had with President George H.W. Bush.

The President was walking across the lawn when he stopped and looked at me, saying, “Hey, magic man, show me a magic trick.”

I reached into my pocket, wondering what I was going to show the President, and all I had was this $1.98 trick. So, I worked a bit of my magic and made a bit of silk appear and disappear. I will never forget the look on the President’s face. It was one of joy and genuine surprise, one that every performer strives to get from an audience. It was pretty cool.

It was controlled chaos. We lived on a mile-long circus train; we nicknamed the international train of fun. There were performers from all over the world that lived on that train. You could go car-to-car and visit with someone from another country.

I met and worked with a troupe from Harlem, New York. They were four boys that rode unicycles and played basketball. Then there was Sandor and Elisabeth Raski, from Hungry. They were the second and third smallest people in the world at the time. They’ve since settled in California, and I’m proud to say I still keep in touch with them.

I also became close friends with famed German animal trainer Ursula Blütchen. She was one of the first female animal trainers and known throughout the community for the work she did with polar bears.

What was one moment or memory that stands out to you?

Opening night at Madison Square Gardens. There is nothing like it. Standing in the ring as the spotlight hits you, and 80,000 people are watching you perform. It doesn’t get any bigger than that.

What advice would you have for someone who wants to become a clown?

Today’s performers are lucky. With social media, they have a lot more tools at their fingertips. I would say to start honing your craft. Practice. Fail. Work hard. Find a mentor, take as many classes 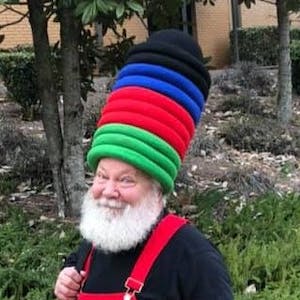 as you can find. I’m even running clown classes through the summer camp programs offer at the National Railroad Museum®. Go to a reputable clown college, and even after you’ve become skilled, keep on learning.

For more than 40 years, Jeff McMullen has entertained the world. You can see him performing throughout the Fox Valley and at the Museum. If you have the opportunity to see him perform or meet him in person, not only will you be genuinely entertained, but you will also have the chance to meet one of the most genuine and delightful clowns ever to perform in the circus.