All Aboard! Next Stop – The White House 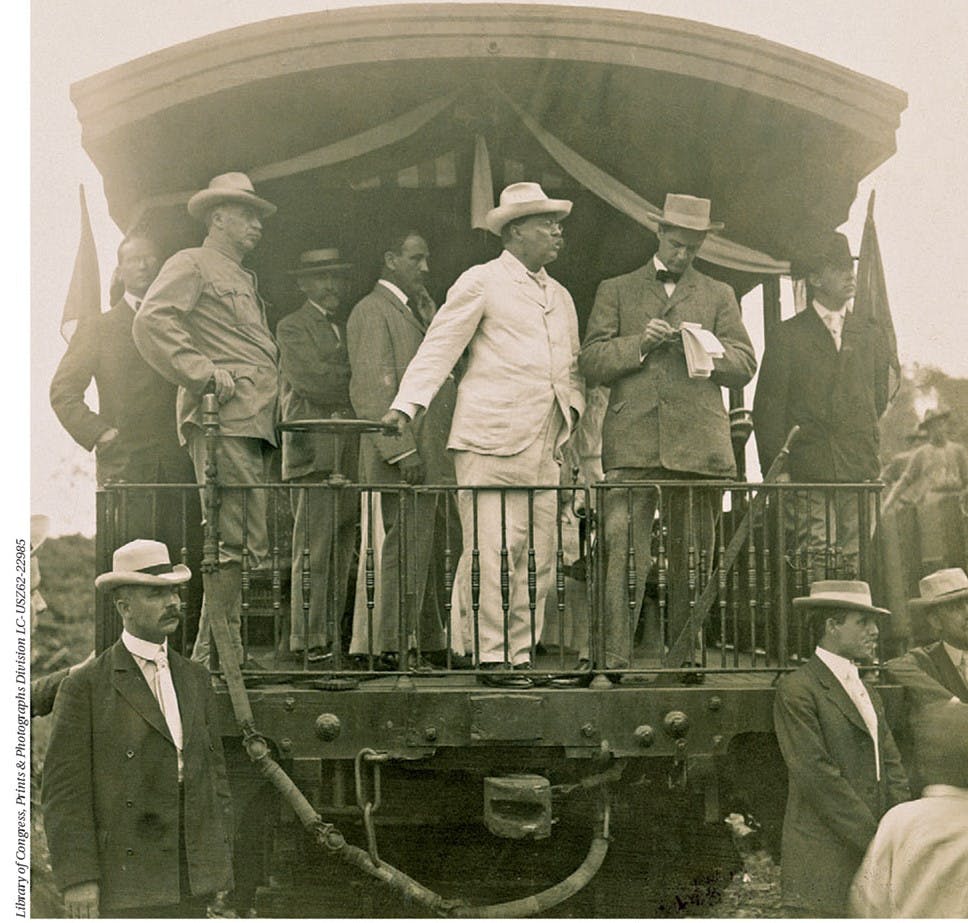 June 6, 1833—President Andrew Jackson, (of twenty-dollar bill fame) boards a Baltimore & Ohio Railroad train in Ellicott’s Mills, Maryland. He is off for a 14-mile leisure trip to Baltimore. His trip also marks the first time the President of the United States rode a train.

In this election year that finds candidates jetting to all corners of the country, may lead you to wonder: if Jackson was the first president to ride the rails, who was the first presidential hopeful to campaign by train? It wasn’t too long after Jackson’s ride that presidential politics took to the high iron. The 1836 contest pitting Martin Van Buren against William Henry Harrison found the loser, Harrison, using the train for campaigning. The first campaign train carried Harrison from Wilmington, Delaware to Trenton, New Jersey during September 1836.

Although he lost that year, Harrison can claim another railroad-presidential first: after defeating Van Buren four years later, he made his way to the White House by train, literally. The president-elect traveled travelled by stagecoach from Cincinnati to Frederick, Maryland, approximately 44 miles from Washington, D.C. Here Harrison boarded a Baltimore & Ohio Railroad train, which took him first to Baltimore, and then to Washington. Yes, it was a circuitous route, but at the time no railroad line connected the District of Columbia directly with western Maryland. In this roundabout manner, Harrison became the first president to arrive for his inauguration by train.

Early presidential travel – or for that matter campaign trips – bore no resemblance to POTUS trips of the modern day. (POTUS — President of the United States, was the label used by the railroads for trains carrying the man.) At first, the president bought a ticket and rode the train like a regular passenger. The late 1800s to early 1900s saw presidents traveling in private railcars that were coupled to the end of regularly scheduled passenger trains. While the railroads appreciated the extra revenue, this type of arrangement caused schedule complications. 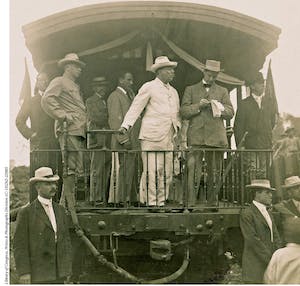 Generally, prior to 1906 there was little or no money appropriated for presidential travel. Funding and how the president or presidential candidates traveled changed with Teddy Roosevelt. While campaigning in 1900, Roosevelt logged 21, 209 rail miles, delivering 673 speeches along the way. Once he became president, Teddy’s train travels continued. During his first term, he expended $118,398 on rail travel—that’s $3.3 million today. Most of Roosevelt’s travel was on the Pennsylvania Railroad, who didn’t mind the extra revenue, sort of.

Roosevelt, due to the extent of his travels, was the first president to utilize a private train. Usually, a five or six car consist, Roosevelt, his staff and guests had the entire train to themselves and ran on their own schedule. Such arrangements created extra work for the railroads. On July 20, 1906, Congress enacted an appropriation giving the president $25,000 annually for travel. Congress was attempting to limit the expense of presidential rail journeys, but was also looking to foster a little harmony between government and private railroad companies. Remember, Roosevelt, with his big stick (“Speak softly and carry a big stick … you will go far.”) and great support of railroad rate regulation, was not the most popular passenger. Congress figured that keeping the president in the White House a bit more would save a few bucks and cut down on the anger railroads expressed concerning Roosevelt’s political positions.

Our other Roosevelt president, FDR, holds the record for the most presidential rail travel and some of the most spectacular POTUS trains. During his 12 years in the White House, FDR recorded 399 train trips totaling 243,827 miles. By his time, presidential trains had grown to over 15 cars. A typical FDR-era POTUS train looked like this:

Ferdinand Magellan is a site to behold. The car was built by Pullman in 1928. It was part of a six-car luxury group within the Pullman fleet. All six cars were named for famous explorers and could be rented for private travel. Magellan or U.S. Car No. 1, as it was labeled in POTUS use, was specially modified to carry the chief executive. The roof, walls and floor are equipped with 5/8-inch thick steel armor. The floor is poured concrete. The windows are each three-inch think bullet-proof glass. For security, the only marking on the car’s exterior was the name “Pullman” centered above the windows on both sides. On board there are four bedrooms, two of which comprise the presidential suite. A lounge is situated at the rear of the car. The dining room with its solid mahogany table can seat eight for meals or meetings. The forward end of the car is divided between the kitchen, pantry and crew quarters. With all this, Ferdinand Magellan is the world’s heaviest passenger car. Tipping the scale at 285,000 lbs., or 142.5 tons, the car weighs more than double its weight when originally built and significantly more than the standard Pullman heavyweight car, which is approximately 80 to 90 tons.

U.S. Car No. 1 was used by FDR, Truman, Eisenhower and Reagan. Today the car can be seen in Miami, Florida as part of the Gold Coast Railroad Museum’s collection.

A footnote to FDR’s presidential rail travel is that he preferred his POTUS trains to move at no more than 25 to 30 miles per hour. In stark contrast, when Harry Truman became president he wanted to zip along at 80 m.p.h. “I’m in no hurry,” FDR once commented. “The sooner I get were I’m going, the sooner people will be wanting something from me.”

Without a doubt, the longest and most noteworthy POTUS train adventure was undertaken by Harry Truman. In September 1948, weeks before the general election, President Truman, seeking a second term, set out on a 31,700-mile whistle-stop campaign tour. Truman rode Ferdinand Magellan, which was the last car of 17 in the train. Along the way he gave 356 speeches. Truman wanted to take is plain-spoken, Midwest mannerisms directly to the people he wanted support from. Speaking from the platform at the rear of Ferdinand Magellan, Truman was greeted by crowds sometimes exceeding 20,000 people.

In reality, the Truman whistle-stop trip was a series of back-to-back runs that criss-crossed the U.S. The only places he missed along the way were the Dakotas, the Deep South and Maine, Vermont and New Hampshire. However, the most famous stop in this tour may have been the one in St. Louis the day after the election. The pundits and pollsters had pretty much written-off Truman and declared the opposition, Thomas Dewey, governor of New York, as the next president. In fact, the Chicago Tribune believed this as fact. Their first edition on election night bore the now-famous headline “Dewey Defeats Truman”. About 150,000 copies made it to the streets before radio bulletins confirmed the headline was a mistake and told the true story of a Truman victory. In St. Louis, a copy of the paper was slipped up to the president while he was standing on the rear platform of Ferdinand Magellan. Truman struck the now famous pose holding the paper next to his smiling face.

Our story of presidential rail travel begins to wind down with Dwight D. Eisenhower. Ike used U.S. Car No. 1 at the start of his administration, however, with coming of new Boeing 707 jet aircraft in 1958, presidential rail travel become impractical. In fact, most presidents or hopefuls after Eisenhower used rail travel more as a publicity stunt that a serious means of travel. Yes, there were a few more whistle stop tours, but nothing like that mounted by Harry Truman.

Ronald Reagan used Ferdinand Magellan in 1984 during a campaign trip across Ohio. Ford, Carter, Bill Clinton and both father and son Bush all ran minor whistle stop campaign trips using cars other than Ferdinand Magellan. More recently, Hillary Clinton, during her failed 2008 run for the White House, gave a live interview to ABC’s Good Morning America while traveling aboard a special Amtrak charter train. The 11-car special made a five-day tour of Maryland, New York, Ohio, Pennsylvania, West Virginia and Washington, D.C. The train had essentially been converted into a rolling television studio for the occasion. The trip with live interviews was another first in presidential rail travel.

Just as the railroads have played a role in so many parts of our lives and nation’s history, we can see how they have facilitated, if not influenced, presidential elections and politics. While the high iron has yielded to the jet way, trains have left an indelible mark on the Office of the President of the United States.