Beyond Your Diner Plate

The Pullman porter has helped you aboard one of the Union Pacific’s famous “City of … trains” —the City of Los Angeles— and shown you to your roomette in the sleeping car Pacific Shores, the second to last car in the train. Your personal items arranged in your roomette and decide to wander to the train’s last car, a dome-lounge. As the train departs on its journey east from the Los Angeles Union Passenger Terminal, your plan is to be sipping a beverage in the dome, watching the suburbs roll by in the twilight.
About an hour into the trip, the melodic sounds of a dining car chime gently roll into the dome. A waiter in a sharp white pressed uniform politely indicates that the dining car is open for dinner seating. The train is approaching its first stop— San Bernardino. Feeling hungry and anticipating a grand dining car experience you descend the stairs and make your way six cars forward to another dome. The Union Pacific is the only railroad with dome-dining cars, and you plan to fully enjoy the panoramic view during this evening’s meal …

Seating is light in the diner at the moment. The steward honors your request for a dome seat and escorts you up the stairs. Once seated, the evening’s menu is presented. You begin to read as the steward withdraws and a waiter fills your water glass. Deep-fried fish … a ham steak … or … roast top round of beef, Jardinière style (served with a mixture of Spring vegetables, such as peas, carrots, and green beans) … what will dinner be?

Regardless of your selection, the food will be incredible, the service top-flight, the table setting beautiful and precise and the scenery from the dome spectacular. 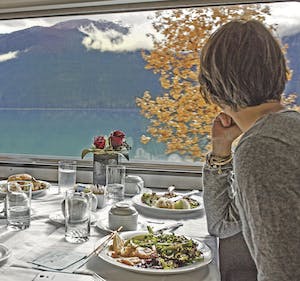 This is what you experience aboard the train. While you await your meal, let you mind wander and think what it takes to make this experience so special.

Long before the train turned a wheel this evening, dozens of people worked in the shadows of the dining car to make your experience happen. By different names, the railroads operating dining cars had a Dining Car, Hotel and Dining Car or Commissary Department. A smaller road may have one commissary location along its line. The larger concerns had multiple locations in key cities. It is the job of this department to ensure that every aspect of the dining car’s operation runs as smoothly as possible and loses as little money as can be afforded while keeping passengers happy.

Before the menu was presented to you this evening, the Union Pacific Dining Car and Hotel Department worked extensively to develop the items to be served. Menus on competing railroads were surveyed. Popular food trends were referenced. Ingredient sources were researched. The seasonality of a dish was checked. Then the menu was built, taking into consideration that your train would have service for two breakfasts, two lunches and two dinners before reaching Chicago. Every effort was made to ensure that each menu had enough different items so that you would not tire of the selections. Also, since your train, City of Los Angeles, regularly carried a café car with lunch counter seating, a different set of menus was needed for service here. The café menus needed to be of quality but lower priced than the full dining car. Additionally, the various menus needed to strike a balance so that passengers would not flood the café for economy reasons, forsaking the full dinging car.

Once the menu was established, ingredients needed to be purchased. Originally, railroads promoted obtaining food items from the best sources, often from farms and orchards along their lines. Tonight, if you were traveling on the Great Northern’s Empire Builder, the menu would have featured salmon for the Columbia River, near its route. On the Texas & Pacific, your dessert choice could have been cantaloupe pie, made with fruit grown along the T&P and shipped by the railroad. Sourcing fresh ingredients in the quantities needed to protect a train like the City of Los Angeles was a costly venture, especially considering fresh ingredients not consumed by the end of the trip were not acceptable for another trip and needed to be disposed of.

As passenger traffic declined following World War II, railroads looked for ways to economize. One economy came from different ingredient types and sources. What was previously stated “Fresh Local Vegetable Du Jour” became “Chef’s Vegetable Selection”. Although both terms fit the elegance of the dining car, the subtle difference is the former was fresh picked; the later came from a can.

For each dish on the menu, the Dining Car Department also determined portion size, method of preparation and how the dish was to be served. Tonight you selected the ham steak. According to the Union Pacific’s cookbook and service manual, your half-pound portion will consist of two “horseshoe cuts” with the bone removed. The whole ham was to be boiled in water for three hours. After slicing from the whole ham, the two-slice portion will be finished under the broiler and then served on a Streamliner dinner plate.

Before you boarded tonight, the commissary staff assembled all the items needed for the trip, assigned them to the dining car steward and then delivered them to the train. The dining car crew loaded the items as the steward checked the inventory. Everything from packages of clean table linens in the UP’s signature soft pink to foodstuffs and even decks of playing cards are accounted for and placed aboard. As part of developing the menu, the exact size of every portion to be served has been calculated. Yes, it is already known how many ham steaks will be carved from the whole hams placed in the dining car coolers. At the end of the trip, the steward will need to reconcile leftover items against every meal ticket from the trip. The totals must match the original inventory or the steward will need to explain the deficiencies.

This same level of accountability held true for the commissaries, as well. Each month the commissary manager was required to present an inventory of his wares. Those items not signed over to dining car stewards had to be accounted for. The manager, like the steward, needed to explain any deficiencies. If a serious loss existed with no explanation, the railroad’s police department or a private security service, like Pinkertons, was called to investigate. In such cases, termination and criminal charges could result for the guilty parties. 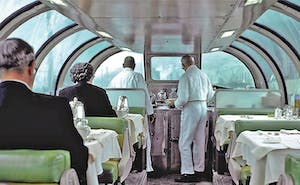 Tonight your meal was prepared on board the train. However, on some railroads, the commissary would complete a portion of the prep work or cooking. On the Southern Pacific it was found that fresh made mayonnaise spoiled very quickly in the heat of the dining car kitchen. The chef would get one or two portions from a batch and waste the rest. The SP commissaries began making the mayonnaise and placing it aboard already chilled. This cut waste dramatically, saving over $500 in olive oil alone in the first month. The Chicago, Rock Island & Pacific (Rock Island) commissary made the ice cream served aboard their trains. Both the Canadian National Railway and the SP had bakeries as part of their commissaries. Here bread, rolls, pies and cakes were prepared in more spacious kitchens and in larger quantities than could be done in the dining car.

Your ham steak has arrived. It is perfection awaiting your knife and fork. As you pick up your utensils a glint of light reflects off their highly polished silver finish. Before service, the dining car crew ensured every piece of silverware on board was perfectly polished. The commissary staff made sure any missing pieces of silverware and china reported after the last trip were replaced with the supplies for this trip. On the Union Pacific every piece of silverware is re-plated every two years. The UP’s commissary used over 125 pounds of silver annually in this effort.

Your meal complete and check settled; it is time to return to your roomette, but only for a short time. Tonight’s sky holds a full moon; and you plan for a nightcap back in the dome-lounge as the City of Los Angeles makes its five-hour sprint across the desert to Las Vegas. The view will be spectacular.

Forward in the dome-diner, other passengers are still enjoying the culinary experience you did earlier. The 11-man dining car crew will finish their day sometime between midnight and 1 a.m.; only to be back on duty around 5 a.m.  You, however, can rest assured that breakfast will be just as fine as your ham steak dinner.

Today one can still enjoy a meal traveling across country aboard an Amtrak train. The food, place settings and service will be different from that of 60 years ago, but the scenery will still unfold outside your window as you dine. At the National Railroad Museum you can explore Union Pacific dome-diner #8003, which was assigned to the City of Los Angeles. In the late 1950s, the City of Los Angeles made the Los Angeles – Chicago run in 40 hours, 30 minutes. It was the way to travel.