Railroad bridges and train trestles can trace their roots back to the industry’s beginnings. Initially built using stone or wood and later using iron or steel, engineers have designed some quite stunning, sometimes harrowing bridges that not only hold a person but heavy trains as well. 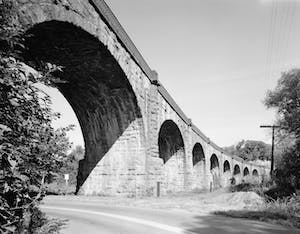 One of the first railroad bridges built in the United States was constructed by the Baltimore & Ohio Railroad, which built its Thomas Viaduct in 1835. Located at Elkridge, Maryland, over the Patapsco River, the bridge gained its name for the B&O’s first president, Philip E. Thomas. At the time of its construction, the Thomas Viaduct was the world’s longest masonry bridge and the first curved structure of its kind. Today it remains the largest bridge of its type and still carries regular freight and passenger trains, a testament to the strength and longevity of not only its stone construction but also the masons who built it.

Trussed Up
While stone bridges are renowned for their overall beauty and extremely long lifespans, they are also costly to build. With an abundance of available wood and lumber, engineers designed bridges that could meet load requirements for short-span bridges, as well as longer spans.

One of the more common types was the post and stringer-type trestles. These bridges are supported by closely spaced frames using several short spans, most commonly resembling a tripod. Often viewed as a ‘temporary’ bridge to get the railroad needed to be going, they were often replaced over time.

For heavier loads, engineers turned to sturdier designs, including the truss bridge. Requiring a relatively small amount of material for the weight a truss bridge can support, this bridge design uses a series of triangles or trusses to carry the load. Some of the earliest truss bridges included designs like the Burr Arch Truss of 1817 or the Town Lattice Truss of 1820.

Initially using wood, new designs would appear over time using iron, including the Pratt truss of 1844 that was patented by Thomas and Caleb Pratt and the Warren truss of 1848. These designs can still be found on some railroad lines in the county, with some having been or are in the process of being preserved.

The ‘Bridge’ of Steel
In the late 1800s, steel became more available to builders and manufacturers. With the increased availability, steel allowed the railroads to construct bridges that were not only larger but far more impressive. 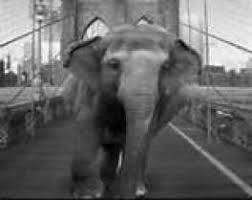 Commissioned by Andrew Carnegie and designed by James B. Eads, the Eads Bridge was one of many firsts. The first to be made of steel and the first to be constructed across the Mississippi River, south of the Missouri River. Measuring 520 feet between the piers, the center arch of the Eads Bridge was the longest span ever built at the time of its construction. Extending more than 100 feet below water level, the foundations were installed using pneumatic caissons. A pioneering application of caisson technology would serve as the model for other bridge projects, including the Brooklyn Bridge.

An engineering marvel, the public was still skeptical about the stability of the bridge. To demonstrate the structure’s safety, John Robinson took to bridge on June 14, 1874, leading a ‘test elephant’ on a march across the newly completed Eads Bridge. It wasn’t the elephant’s size and weight that convinced the public, as it was a popular belief that elephants had instincts that would make them avoid setting foot on an unsafe structure.

To everyone’s amazement, the elephant made it safely across the bridge and made believers out of the crowds of cheering spectators. To prove it one more time, Eads sent 14 locomotives back and forth across the bridge.

A few other record-holding bridges can be found in the United States, including:

Many of these bridges have stood the test of time. Not only are they still standing, but many are still used daily. In fact, the average age of a railroad bridge in the United States is 43 years! With proper upkeep and maintenance, they can last generations to come.