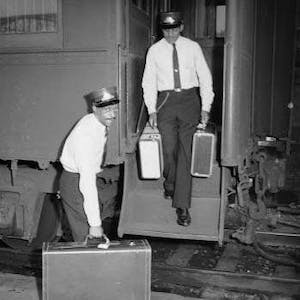 Two members of the Brotherhood of Sleeping Car Porters carry luggage from a sleeping car in this 1946 photo.

The life of a Pullman Porter was far from perfect. In 1867 George Pullman, founder of the Pullman Company, discovered an opportunity to expand his labor pool by hiring freed black men to work as porters on his sleeping cars.

The porter’s job was to carry bags, shine shoes, serve food and drinks from the dining car, maintain the sleeping berths, and cater to every whim a passenger had. They were available to passengers anytime day or night and expected to perform their duties with a smile.

By the time the early 1900s rolled around, Pullman was the largest employer for black men in the United States, and the job of a Pullman Porter was one of prestige within the black community. They even had some semblance of protection within the organization as Pullman created an in-house company organization focusing on employee representation or an in-house ‘union.’

While paid more than many other black workers at the time, the job wasn’t without its challenges. Porters worked long hours and faced lots of racism. Passengers weren’t kind, often calling them “boy” or “George”, a throwback to when slaves were named after their owners in the south.

On average, a porter worked 400 hours a month. Many would work 20 hours a day, and any time spent sleeping while on a trip was deducted from their pay. Porters were also expected to ready their sleeper cars at their own expense, arriving several hours early to set up. Their pay was also docked anytime a passenger would take an item as a souvenir, including towels and blankets. Porters were also responsible for purchasing their uniforms, cover lodging costs, pay for their meals, and supplies needed to perform their jobs.

Turning to their in-house representation wasn’t an option. The in-house company supported the needs of management rather than the workers.

When other railroad employees were banding together to form unions to fight for better pay and better working conditions, black railroad employees weren’t welcome to join them, leaving them unrepresented at the bargaining table. Frustrated by their situation with the Pullman Company, Pullman porters organized and approached A. Phillip Randolph, and together they formed the first black union: The Brotherhood of Sleeping Car Porters.

Like other unions, the Brotherhood of Sleeping Car Porters faced a backlash from the Pullman Corporation trying to break the union; however, the Railway Labor Act’s passage in 1926 gave the union its first glimmer of hope.  The act stipulated that “disputes over wages, rules, and working conditions involving railroad workers were to be settled promptly through negotiations between labor and management, overseen by a Board of Mediation without interference, influence, or coercion.”  However, this was the loophole the Pullman Company needed as they claimed more than 85 percent of its porters were members of their in-house union and didn’t have to recognize the Brotherhood of Sleeping Car Porters or their demands. 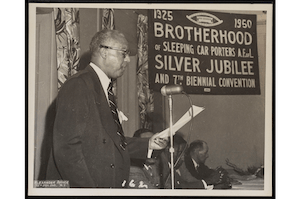 A. Philip Randolph giving a speech at the Silver Jubilee and 7th Biennial Convention of the Brotherhood of Sleeping Car Porters. Photo by: Alexander Archer

It would be at least a decade before Randolph’s efforts, and the Brotherhood of Sleeping Car Porters would pay off. In 1937 they secured their first collective bargaining agreement with the Pullman Company giving porters a huge hike in pay and limiting their hours to 240 working hours a month. This win with the Pullman Company was also the first time in U.S. history that a union of black workers would reach a bargaining agreement with a major U.S. company.

Viewed as the father of the civil rights movement, Randolph would fight for the rights of the black working class, serving as the vice president of the AFL-CIO in 1955 and as the chair of the 1963 March on Washington. He would eventually retire from the Brotherhood of Sleeping Car Porters in 1968 to become president of the A. Philip Randolph Institute and continued to serve on the AFL-CIO Executive Council in 1974.

As for the Brotherhood of Sleeping Car Porters, when railroad travel began to decline in the 1950s, so did their numbers. Even more so by 1969, when the Pullman Company ceased sleeping car service. But the impact of the Pullman porters and the Brotherhood of Sleeping Car Porters would have a lasting effect in history. Its economic, social, and cultural influence is spread throughout America.