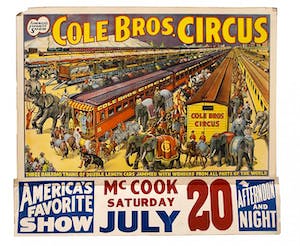 “Ladies and gentlemen, children of all ages, welcome to the greatest show on Earth. Tonight, from your very seat you will witness dromedaries that dance and delight, daring feats on the high wire, great leaping lamas, bold bare-back riders, un-tamed tigers, prancing pachyderms and cavalcades of clowns.” -unknown

The circus has come to town with all its glitz, glory, and tradition. How, one wonders, did all these performers, animals, and tons of stage gear get to the arena? By train, of course!

Today, the Ringling Brothers, Barnum & Bailey Circus still travel by train. There are also a couple of carnivals, complete with rides and sideshow attractions, that move by rail. The glory days of the circus train, unfortunately, are long gone. During this bygone era – the 1920s, ‘30s and40’s – an arriving circus train was a massive event for a smaller town.

We must understand that the circus train was not all color and glory. In fact, circuses were the hard work of moving massive shows on a very tight schedule. The circus train was an intricate puzzle of organization with feats of movement as daring as those played under the big top. As the circus train traveled, much of the show’s color was covered to keep the road dirt off. Dirty equipment had to be cleaned, which took time the circus did not have.

Before we unload our circus train, which was exciting to watch, let’s step back into history and see how this type of train developed. Until the end of the U.S. Civil War, a circus generally traveled by horse-drawn wagons. Travel was limited by both the speed of the horse team and the condition of the roads. Horses were good for 10 to 20miles per day over good roads. Considering that most roads at the time were less than ideal, a travel schedule easily fell apart.

During these early times, a circus ‘equipment and its cast and crew traveled separately. Once in a performance town, the cast would be put up in local hotels. Some of the crew could be found camping at the performance site.

On April 18, 1872, William Cameron Coup, who at the time was leasing the Barnum Circus, launched the first circus train using the operational style that would become standard for roadshows. Coup developed the method of loading wagons on flatcars in the specific order they were needed and for having the cast and crew live on the train throughout the show season. Rail travel times were significantly less than by horse-team, allowing for a tighter schedule with more shows and more money in the owner’s pocket if the show was well managed.

In the early years, the term “circus train” held another meaning, as well. While the circuses were finding their way onto the rails, the railroads were fielding another type of circus train. From the railroad perspective, carrying people to the circus was big business. With rail travel, the distance of a “jump,” or movement of the circus train, was expanded. Jump snow-covered 30, 50, or even 200 miles overnight. On the day of a show, the railroad would run extra passenger trains into that town, filling the big top – clearly a moneymaker for both railroad and circus.

Now back to the other type of circus train. Each circus had a taskmaster, the man who is in charge of loading and unloading the train. His job was one of diplomatic negotiations with the local railroad, driving taskmaster with the circus crew and master of time and order. Every piece of equipment had to be loaded on a specific car on the train each time. One item out of place would cause severe delays in the next town. The trainmaster had to ensure that the train was properly switched in each town, with the right cars at the designated load/unload points in the correct order. Many times, coaxing such moves from the local switching crew was an exercise in extreme diplomacy. Finally, the trainmaster was required to push his crew through the dangerous job of loading and unloading at a breakneck pace. One slip or fall could put the process an hour behind, which was enough to compromise the next day’s show if the time were not made up along the way.

The well-choreographed dance of loading and unloading a circus train was something to see. The public turned out to witness this event, for in many small towns the day the circus made its annual visit was one of celebration. In 1936, The Cole Brothers Circus was one of the larger shows on the road. They came with a large big top, a midway, sideshow attractions, an animal menagerie, various tents used as dressing rooms and prop staging, ape tent (staff eatery) ticket, and office wagons, as well as a big generator wagon to provide electricity to the show site.

Even before the last show of the day started, the Cole Brothers began loading their trains. As soon as the cast and crew cleared out of the tent before showtime, it came down and was moved to the train. As soon as the last show began, the midway, sideshow, and animal menagerie were closed, packed, and put on the train. When each act finished, their gear was crated, loaded on wagons, and then onto the train. As work in the ticket and office wagons concluded, they were swiftly hitched to horse teams or a tractor and run to the train. For the Cole Brothers, as with most shows, the big top was the next to last item loaded on the train. Finally, when everything else was off the show lot, the electrical department would kill the generator and pick up the red lanterns left along local streets marking the route to the train. With this final piece of equipment, the circus train was ready to make its next jump.

The larger circus trains generally traveled in several sections. As one group of cars was loaded, a locomotive would couple on and take them to the next city. Before the entire circus arrived in the next town, unloading was already underway. By the 1950s, other forms of entertainment began to impact the popularity of the traveling circus. Better highways and tractor-trailer trucks also took their toll on the circus train. Many circuses combined or simply went bankrupt. Those that switched from the rails to the roads found varying degrees of success. Trucks broke down, stranding a load of crucial equipment. The weather also caused schedule disruptions. In the end, only the Ringling Brothers, Barnum & Bailey Circus remained loyal to the traditional circus train. Today the show has two shows – the red unit and the blue unit – which travel by rail. And, yes, they operate in much the same style developed over a century ago.

The show must go on—and when the circus goes, it goes by train!