Many have heard of the exquisite and luxurious five-star meals that were served on some of the most elegant and prestigious passenger dining cars for nearly a century. Meals prepared by gourmet chefs with years of culinary training, served by waiters on linen as clean and white as freshly fallen snow. The tables set with silverware that would gleam; each in its own special spot laid out so the diner could easily choose what utensil went with what appetizer, salad, or entree. For decades these dining cars blessed the rails, and the service was always top-notch. But what about the crews who rode the rails of a freight train? What happened when it was their turn to dine? There were no chefs to prepare the food. Just good old-fashioned innovation, quick thinking, and some luck along the way. 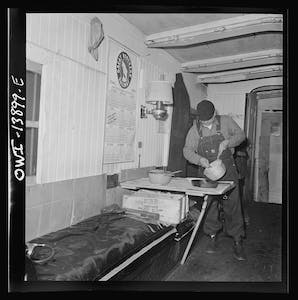 On a freight train, when the crew got hungry it was up to them to make cook their meals. Sure, a stop at a lunch counter or diner along the tracks may occur occasionally, but there was often not enough time for that, so train crews had to bring along what food they could and make do.

It was common for railroads to assign a caboose to a conductor for his exclusive use. Conductors took great pride in their cars, despite the caboose’s many derogatory nicknames, including crummy, doghouse, bone-breaker, snake wagon, and hearse.

The men decorated their car interiors with many homey touches, including curtains and family photos. Some of the most important additions were ingredients for cooking meals that became a part of American folklore. Augmented with such comforting features, the caboose served as a home away from the trainmen’s home terminals.

Coal or wood was originally used to fire a cast-iron stove for heat and cooking, later giving way to a kerosene heater. Now rare, the old stoves can be identified by several essential features. They were without legs, bolted directly to the floor, and featured a lip on the top surface to keep pans and coffee pots from sliding off. They also had a double-latching door, to prevent accidental discharge of hot coals caused by the rocking motion of the caboose.

Most of the food cooked on the caboose came in cans, with meats and vegetables being usually fresh from the market that morning. The conductor or brakeman, or whoever was the most competent cook in the rolling kitchen, would prepare the meals. Many times, the crews used what they had available, catching fish, wild game and even getting a few handouts from neighbors along the track. Everyday items became kitchen items, such as oil cans that became cook pots and newspapers that doubled as tablecloths.

One particularly interesting recipe was a dish called “Caboose Turtle Chowder.” It went as follows:

In a 5-gallon oil can, boil turtle meat. Using a sieve, drain the broth and save it for later. Remove the bones from the meat and set the meat aside. Put the oil can back on the stove and brown the salted pork. Add the potatoes, carrots, onion, and green pepper to the pot and brown until onions are translucent. Add in the tomato paste, turtle meat, and reserved broth and let simmer until the vegetables become tender. Add salt and pepper to taste. Serve and enjoy!

Most of the time, the menu was not as exotic and often consisted of many stews and soups or whatever they could conjure up. With lots of hard work to be done and not much time to stop, the caboose became a home and a feeder for many who made the runs between cities on the backend of a train. The food wasn’t always fancy, but it was hearty and kept the crews going strong through all types of weather and all kinds of work.