Since its establishment by the Post Office Department in 1864 to help facilitate mail delivery over greater distances and quantities, the Railway Mail Service became a reliable entity for the transit of mail across the United States via the railroads. During much of its 113-year existence, the Railway Post Office served as the quickest way for a letter to travel from your hand to the home or business of its recipient. The fast mail or fireball mail wove its way into the nation’s minds and hearts through song, story, and imagery. It’s one of the reasons the trains often ran so fast and why we have songs about speeding trains jumping trestles, i.e., “The Wreck of the Old ’97.” However, by the mid 20th century, the fast mail had slowed to a crawl, well actually, the amount that was being delivered by rail had decreased. Let’s see what led to the downfall of this once efficient service. 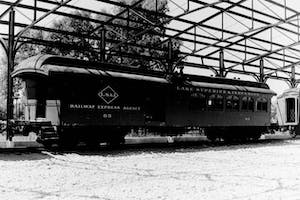 Mail by rail wasn’t only destined for the nation’s large cities, but also for towns and rural villages where the mail that had been sorted en route was thrown off moving trains in pouches or picked up, as railroaders say, “On the fly,” as the train did not stop, from line-side mail cranes which held a bag of “outgoing” mail. A crew of clerks would sort the mail en route, and you needed to pass a rigorous speed and competency test to qualify, and deliver it quickly, sometimes to the next town over, leaving only minutes to sort through a 50-pound bag of letters.

At their height, over 4,000 Railway Post Office (RPO) cars were used on over 9,000 train routes covering more than 200,000 route miles in North America. While most of this service consisted of one or more cars at the head end of passenger trains, many railways operated solid mail trains between major cities; these solid mail trains would often carry 300 tons of mail daily.

After 1948, the railway post office network began its decline, although it remained the principal intercity mail transportation and distribution function within the Post Office Department (POD). 794 RPO lines were operating over 161,000 miles of railroad in that year. Only 262 RPO routes were still operating by January 1st, 1962.

In 1942, the POD began experimenting with a highway version of the RPO to serve the same purposes along routes where passenger train service was not available. These highway post office (HPO) vehicles were initially intended to supplement RPO service, but in the 1950s and 1960s, HPOs often replaced railway post office cars after passenger train service was discontinued. The last interurban RPO service was operated by Pacific Electric Railway on its route between Los Angeles and San Bernardino, California.

With competition from highway and airlines, the decline had started to set in. By 1967, the Post Office eliminated many routes, as railroads, which carried the RPO cars in their passenger trains, dropped them because of low ridership and mounting financial losses. 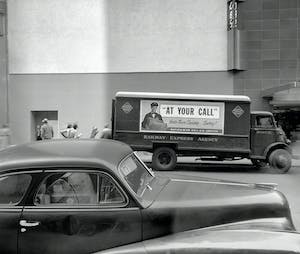 When the post office made a controversial policy change to process mail-in large regional centers, mail was now sorted by large machines, not by people. The remaining railway post office routes, along with all highway post office routes, were phased out of service. In September 1967, the POD canceled all mail by rail contracts, electing to move all First Class mail via air and other classes by road transport. This announcement had a devastating effect on passenger train revenues, as passenger service never made a profit for most railroads, who relied on revenue from the mail to cover passenger costs.

By 1977, the New York-Washington route, with a daily northbound and southbound mail-only trains, no passengers were carried, was the last such trains operating in this country. The final run for the trains was scheduled for June 30th, 1977, with the New York train, No. 4, departing Washington’s Union Station at 10 p.m. Making a stop in Baltimore around 11 p.m., its sister train left New York’s Pennsylvania Station at 11:40 p.m. Train No. 4 arrived at Pennsylvania Station on time at 2:50 a.m., with its counterpart ending its run at Union Station a little after 3 a.m, thus bringing an end to an era.

However, the last run of the name “Railway Post Office” was made by the Boat Railway Post Office in a run over Lake Winnipesaukee between The Weirs and Bear Island in New Hampshire, with the postmark reading, September 30th, 1978.

While we do have a Chicago, Burlington, and Quincy RPO car here at the National Railroad Museum, it no longer carries letters. If you do happen to drop one in the slot, you may get it back someday with a stamp that says: “Return to sender, address unknown. No Such number, no such zone.”