Freedom Trains of the United States

Freedom Train Part One: 1947-1949
With the 4th of July literally around the corner, we reflect on the freedoms we have and sacrifices our nation has endured, both in the past and the present. As Americans, we live in a country where the “Can Do” spirit allows us to attain momentous achievements. Take the railroad, for example. Through the blood and sweat of many, we were able to unite this nation after a horrific civil war, both figuratively and literally, by establishing the First Transcontinental Railroad. As we approach our Independence Day, let’s look at how the railroads celebrated our freedoms in its unique way.

After the largest conflict in human history, World War II, many Americans celebrated the freedoms and liberties they had achieved during the war, especially coming out of the Great Depression. Purchasing power had risen dramatically, and many people in the United States were on the move. One of the mediums that facilitated this movement was the railroads. However, some felt that many Americans had begun to take for granted some of these principles of liberty. One such man was Tom C. Clark, 59th Attorney General of the United States.

To remedy this and make Americans appreciate where we came from and how much we had achieved, Attorney General Clark came up with the idea for a Freedom Train in April of 1946, enthusiastically embraced by organizations such as Paramount Pictures and the Advertising Council.

Advertising executive Thomas D’Arcy Brophy described the Freedom Train as a “campaign to sell America to Americans.” In February of 1947, the American Heritage Foundation was formed with an assortment of who’s who in business serving on the board. As it was expanded, many African Americans were added to the board, including civil rights leader A. Phillip Randolph, President of the Brotherhood of Sleeping Car Porters.

The Freedom Train was equipped with many key documents from American history. A copy of the Emancipation Proclamation, a letter authored by Christopher Columbus, the Mayflower Compact, and documents relating to the German and Japanese surrender from World War II were some of the artifacts displayed.

To show modernity, a pair of ALCO PA diesel-electric locomotives, dressed in red, white and blue attire, pulled the train, which carried the original versions of the United States Constitution, Declaration of Independence, the Truman Doctrine, and the Bill of Rights on its tour of more than 300 cities in all 48 states. As Alaska and Hawaii did not gain statehood until 1959, this train toured all of the U.S. states that existed at the time. It was the first train to visit all 48 contiguous states. 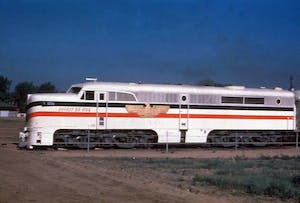 The Freedom Train kicked off its tour in Philadelphia on September 17, 1947, and wrapped up in Washington, D.C., on January 22, 1949, visiting every state along the way. A notable appearance was at the Chicago Railroad Fair in July of 1948.

The Freedom Train also became one of the first institutions to be desegregated after insistence by President Harry S. Truman. When certain areas of the nation refused to follow the orders listed by the President, such as Birmingham, Alabama, where the civil rights movement was gaining steam to erupt a decade later, those cities were skipped entirely. In many cities, people of all races helped to bring the Freedom Train through their town. At its height, nearly 1200 people per hour were able to tour the spaces occupying the Freedom Train, giving Americans a sense of achievement of how far we had come and how much we needed to keep going.

Freedom Train Part Two: 1975-1976
In the early 1970s, as the bicentennial of our nation was approaching, many had ideas about how to celebrate America’s 200th birthday on July 4, 1976. In addition to the parades and shows, why not celebrate the country’s 200th with one of its premier and oldest icons, the railroads! 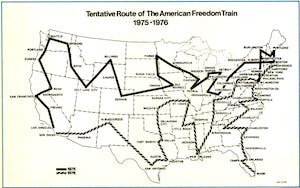 Route of the Freedom Train

Stockbroker and amateur railroad engineer, Ross Rowland, had an idea for a Bicentennial Train, one that would expand on the concept of the original Freedom Train from post World War II and the 100th anniversary of the completion of the Transcontinental Railroad. Dubbing it the Freedom Train in honor of the original, Rowland started planning in 1971, with very little success, thinking that his dream may never come true.

However, Rowland caught a break during the spring of 1973 when he met Ralph Weisinger, a close associate of PepsiCo’s chairman Don Kendall. Kendall liked the concept and quickly approved sponsorship of $1 million for the American Freedom Train Foundation. Following Pepsi’s backing, Rowland suddenly found himself with numerous sponsors lining up to fund the train from Kraft Foods to General Motors. Incredibly, help to get the project off the ground even went to the highest levels of government. When President Richard M. Nixon learned of Rowland’s intentions, he opened the federal archives to the American Freedom Train Foundation, instructing that it be allowed full access to historic documents for display on the train. Such a gesture allowed Rowland to feature such pieces as the Constitution and Bill of Rights. In all, more than 500 artifacts of Americana would be displayed on the train. 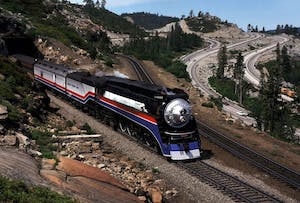 Building on the nostalgia of steam power, as opposed to diesel’s modernity, three steam locomotives were pulled out of retirement to pull the new Freedom Train. They would consist of a Reading Company T-1 class 4-8-4 #2101, a Southern Pacific #4449, a large 4-8-4 Northern type, and finally for its Texas runs, the Texas & Pacific’s #610, a fine 2-10-4 Texas type.

The train itself consisted of 10 display cars, converted from Penn Central baggage cars. They carried more than 500 treasures of Americana, including George Washington’s copy of the Constitution, the original Louisiana Purchase, Judy Garland’s dress from The Wizard of Oz, Joe Frazier’s boxing trunks, Martin Luther King, Jr.’s pulpit, and robes, replicas of Jesse Owens’ four Olympic gold medals from 1936 — one of which was stolen somewhere along the way — a pair of Wilt Chamberlain’s basketball shoes, and a rock from the Moon!

Its tour of all 48 contiguous states lasted from April 1, 1975, until December 31, 1976. More than 7 million Americans visited the train during its journey, tens of millions more stood trackside to see it go by. 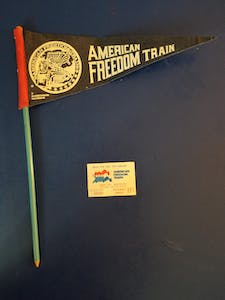 On August 15, 1975, the Freedom Train came steaming into the National Railroad Museum. Museum Store Associate, Cheryl Toth, was one of those who visited the Museum for the Freedom Train when she was in elementary school. She even saved the pennant and ticket stub from this momentous encounter!

The Bicentennial Freedom Train was by far the greatest events on rails since the end of the steam era in the late 50s and early 60s, and the uniquely magnificent vehicle that brought America’s Bicentennial celebration to the people. The locomotives from the Freedom Train are still preserved, with the Southern Pacific #4449 still in excursion operation and the T&P #610 and Reading #2101 in static condition. The running of steam locomotives on the Freedom Train sparked American interest in steam operations and reinvigorated the use of such units on excursion tours and brought back American nostalgia for a simpler time, take the restoration of the U.P. Big Boy #4014 for example.

So, on this 4th of July, remember the liberties and symbolism that the Freedom Trains represented in our nation and helped unite us in times of conflict and to let us know that no matter what, we are all Americans.