From Boxcars to Big Boy: The Story of Railroad Graffiti

During the first decades of the 20th century, the circus arrived in town aboard one of the most colorful trains traveling the rails. Brightly colored railcars carrying ornate wagons drew the attention of people along the tracks. The circus train was a sight to behold.

Today, almost all the circus trains are gone. However, viewing outrageously colored railcars along the tracks is not a thing of the past. Think of the last train you saw–a locomotive in company colors dressed with a bit of road dirt pulling an array of cars that hold the contemporary colors of the rainbow. We’re not talking about the faded boxcar red or the safety yellow on intermodal walls, or even the basic tank car black, but the bright and bold colors that mask these traditional colors by graffiti.

To most, railcar graffiti is a chaotic mix of spray-painted colors presented in meaningless squiggles and shapes. It is an act of vandalism, damaging railroad property and creating an eyesore for all who see the railcars. By definition, graffiti is writing, or drawings scribbled, scratched, or sprayed illicitly on a wall or other surface in a public place. Writing graffiti on train cars is also dangerous and generally involves the artists committing several crimes.

Despite its negatives, graffiti does have an intriguing artistic style about it. Viewing graffiti has to make one wonder what the artist thought about as he or she worked? How was this work created with spray paint? How did someone paint such a large portion of a railcar without getting caught? Or, did they get caught, and what happened to them?

From the word “graffito,” meaning an etching made on Italian pottery, to the famous World War II-era “Kilroy was Here,” graffiti has fascinated as much as caused controversy. The oldest known example dates to ancient Greece and is thought to be an advertisement for the world’s oldest profession – prostitution. Graffiti has been found in the Mayan and Viking cultures. Artist Da Vinci and Donatello were known to write their names wherever they traveled. Armies throughout the world have been known to leave graffiti behind as part of their conquests.

American hobos added a unique chapter to the graffiti story during their heyday: 1865 – 1941. Most hobos did not use their real names when traveling. Their road name could be spoken, but also manifested itself as a symbol. With these symbols, hobos signed messages to one another, the messages being left on all types of public places. Hobos also spoke in a symbol language. There existed several dozen symbols indicating everything from a what house was good for a handout, to which towns arrested hobos on sight. Ask your grandmother if she ever provided a hobo with some food. After that first handout, the hobos appeared regularly. Did she ever wonder how they knew which house to visit? The answer lies in a hobo symbol graffitied somewhere nearby, indicating her home was good for food. 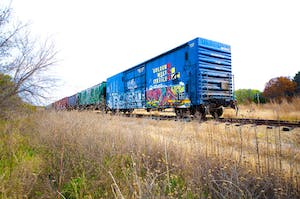 Modern graffiti, as we know it, began in the United States and is attributed to a Philidelphia high school student known as “Cornbread.” Trying to attract the attention of a girl in 1967, he began signing his name, or “tagging,” public areas of the city. The form exploded in New York during the 1970s as “TAKI 183” and “Tracy 168” would “bomb” subway cars with their imaginative signatures, spreading the graffiti idea throughout the region the train traveled. The growth of street gangs and the political and social changes that characterized the 1960’s and 1970’s, whose sometimes illegal and divisive tactics marginalized the art form, while simultaneously bringing it into mainstream American culture. Today graffiti is alternately lauded by art critics and enthusiasts, while demonized by property owners, creating tension and discussion within the community about issues ranging from vandalism to free speech.

From a railroad’s perspective, graffiti is an act of vandalism that damages property and creates communication issues. Ironically, however, one of the world’s largest and most famous steam locomotives was named through an act of graffiti.

As the Union Pacific Railroad (U.P.) 4000 class locomotives were being assembled by the American Locomotive Co. (ALCo) in Schenectady, N.Y. unauthorized writing created the now legendary moniker Big Boy. In one of the erecting bays, an anonymous machinist climbed up to the platform at the front of the locomotive. In chalk, he left a message on the smokebox door, “Big Boy.”

As was customary during the steam era, the railroad introducing a new locomotive wheel arrangement selected a name for the class. At first, U.P. officials reportedly contemplated the name Wasatch; in reference to the eastern Utah mountain range, the new locomotive was designed to climb. However, no official action was taken on this suggestion.

Whether or not the U.P. was considering alternatives is unknown, and despite the railroad’s best efforts to play down the name, the ALCo workers and the press began using it. The title stuck and was eventually adopted by the U.P. This act of graffiti also generated over 500 positive news stories on the development of the new large locomotives.

Let’s go back to the current day freight train we were watching at the beginning of our story. As you view the graffiti on each car, some are more refined than others; possibly the works of experienced or more talented artists. The colors are blended in more pleasing manners. The large color fills are solid. The lines appear to be formed in a controlled manner. You ask yourself, how can someone do this with spray cans from the local hardware store? Don’t be so sure the more advanced graffiti was created with off-the-shelf, local paint store products. A recent Internet search for “graffiti supplies” netted 22.2 million results. The top results were websites for graffiti supply stores, both physical and mail-order, offering numerous paint lines in hundreds of colors. The supply stores also sell special spray tips for creating a wide range of lines and fills as well as other items the graffiti artist may need, such as permanent markers and specialized duffel bags designed to carry many spray cans.

Despite the exciting colors and mind-blowing letterforms, graffiti on railcars is a criminal act that damages property and creates a hazardous environment for those using the cars.

The average freight car costs $5,000 to over $50,000. The paint used on rail cars costs as much as $300 per gallon. While graffiti does not render a train car useless, it does cause a severe communication problem.

Did you ever wonder what all the letters and numbers on the side of rail cars mean? These are the cars’ identity. This information indicates who owns the train car, how much it can carry, its dimensions, maintenance data, and safety information. When covered by graffiti, railroad workers and shippers lose vital information, which can slow work, damage the car or even cause an accident.

Although car data can be located on a railroad’s computer database or through printed material, these are not generally available in the field. If a rail worker, shipper or emergency personnel look at a car for data and find it covered with graffiti, there is a severe communication problem.

State laws deal with railroad graffiti in different ways. As examples, Texas and Florida have penal code sections that define the act and prescribe penalties for it. Every state has a statute dealing with trespassing.

Since railroads are private property, graffiti writers are trespassing. Several states, like California, Florida, Texas, and Wisconsin, have laws dealing specifically with damages to railroad property, which include acts of graffiti.

What do you see in graffiti? Is it a form of artistic expression? Are graffiti artists talented individuals displaying their skills in a misguided manner? Or do their actions show blatant disrespect for the property? Do such individuals realize they are placing themselves in dangerous situations to garner attention? For every act of graffiti, there is another opinion on this centuries-old subject.