Thanks for catching up with us again along the line of the Transcontinental Railroad. Hell on Wheels has moved down the line a distance since we last visited, but we still have plenty of hair-raising, rough and tumble tales to share.

The premise of our discussion is that the facts of historic events often get in the way of telling a good story. Many times liberties are taken with reality to produce enhanced television programs and movies, which may be more exciting to watch, but should be taken with many large grains of salt.

We are focusing on the television show, Hell On Wheels, based upon the camp following the same name that moved westward with the building of the Transcontinental Railroad here in the United States. Hell On Wheels ran for five seasons, coincidentally roughly the same time it took to build the real Transcontinental Railroad, and uses the building of the railroad as a backdrop for many of its stories. We see a group of railroad men and women make their way west on the Union Pacific side, and later in the series, we see elements of how the Central Pacific overcame nature and other difficulties to finally join up with the Union Pacific at Promontory Summit on May 10, 1869.

Q.: Were the different nationalities well depicted in the series?

A.: For the most part, the TV show is extremely accurate. African-Americans, such as Elam Ferguson and Psalms Jackson, did form a portion of the workforce for the Union Pacific. Many African-Americans had recently freed from slavery and were looking to build a better life. Some, like Psalms, took advantage of the land grants sales offered by the railroads and purchased a piece of America to settle on and start a new life. 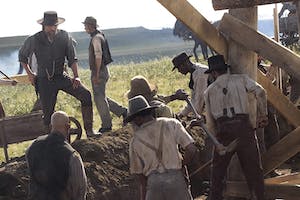 There were numerous Irish and German immigrants, among others, who came to work on the railroads. Leaving the east coast cities to find something better, they did the backbreaking work of grading the roadbed and track laying. A good portion of the workers, immigrants included, had recently fought the Civil War. Although now building as one army, both the Union and Confederacy had previously called these men soldiers. As stated by Gen. Ulysses S. Grant, during the TV series, when he is speaking to Cullen Bohannon, “It is good for those who fought on opposite sides, Union and Confederate, to work together to unite this country with the building of a Transcontinental Railroad.”

The Chinese laborers who worked for the Central Pacific are also accurately depicted. The other races represented in the work gangs generally looked down on the Chinese, even though they were excellent workers and exhibited better discipline than most other workers on the railroad. Leland Stanford, a one-time California governor and Central Pacific Railroad president had doubts about hiring Chinese workers due to their small frame and communication struggles. However, seeing as most other laborers in California would only work until they received a paycheck and then leave to try their hand at gold and silver mining, Stanford was forced to hire the Chinese. They proved equal to the task. As seen in the TV series, through backbreaking work, they laid a record-setting 10 miles of track in one day. Additionally, due to their diet and boiling water to brew tea, the Chinese were not often as sick as other workers. The latter drank water that was sometimes contaminated with cholera and other diseases.

Q.: Was John Campbell governor during the building of the Transcontinental Railroad?

A.: John Allen Campbell was the governor of Wyoming Territory, but not at the time as he is depicted in the series, serving from 1869 to 1875. Most everything we see in the series about Gov. Campbell is false or highly embellished, especially his treatment of women and his age. Jake Weber, who portrays Campbell in the TV series, is almost two decades older than what the real Campbell was when he assumed office in 1869 at the age of 34. While governor, Campbell approved the first law in U.S. history, explicitly granting women the right to vote. The law was enacted on December 10, 1869. Today, this date is known as Wyoming Day and is an official state holiday.

Q.: Was Eva Toole (nee Oates) based on a real person?

A.: You may recognize her as a working girl and eventual proprietor of the central brothel from Hell On Wheels. She sported a distinctive facial tattoo that she received while a prisoner of some Native Americans. Eva Toole’s story and facial tattoo are based on a real person named Olive Ann Oatman. Oatman was abducted by the Yavapai, along with her younger sister Mary, in 1851 after her family was massacred. She was later traded to the Mohave and released after five years. Eva’s past follows a similar tale in which the highlight is the facial tattoo below her lips descending to 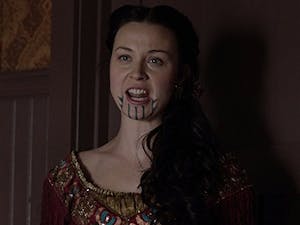 the chin. This mark is modeled almost right after the one sported by Olive Oatman. In addition to having the same tattoo and similar abduction story, both Olive and Eva were raised in the Mormon faith. We see Eva discussing with Brigham Young, Mormon leader, as he invites her back into Mormon society. Aside from the personal history and facial tattoo, the similarities stop. Eva became a prostitute and eventually rode off into the sunset at the end of the TV series, not knowing what happens next. Olive married a cattle rancher and settled in Sherman, Texas, and often gave speeches and wrote a book about her captive experience. Olive Oatman Fairchild died in 1903 at the age of 65.

Q.: Driving of the Golden Spike, an accurate or false depiction?

To drive the final spike, Stanford lifted a silver spike maul and drove the spike into the tie, completing the line. In reality, Stanford missed the spike, but the single word “DONE” was nevertheless flashed by telegraph around the country. The locomotives were moved forward until their cowcatchers met, and photographs were taken. The golden spike and the laurel tie were immediately removed and replaced with a regular iron spike and standard tie. At exactly 12:47 p.m., the last iron spike was driven, finally completing the line. In comparison to the TV series, Cullen Bohannon drives the last iron spike. In reality, the final iron spike was driven by a common laborer, whose name is lost to history.