During a time when women didn’t “go into mathematics,” “weren’t into science”, there are many trailblazers who didn’t give in to the belief that women couldn’t do “those types of things.” Often overlooked, women in the railroad industry have made significant improvements in safety, mechanics, and design. Here are a few. 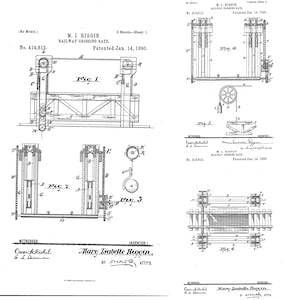 Mary Riggin:
Safety was of little concern in the 19th Century in everyday life, and railroads were no different. As trains became larger and faster and thus more dangerous, it was becoming clear that things needed to change. Grade crossings, even today, are a dangerous place. In the 19th Century, they were even more deadly because they lacked the crossing gate. This meant accidents between trains and wagons, animals, and even pedestrians were not uncommon sights.

One witness to such an accident was a woman by the name of Mary I. Riggin. After seeing such an event, Riggin had the idea for the crossing gate. The gate was intended to warn pedestrians and drivers of an approaching train. Although automated today, the central idea of a gate lowering and blocking access to the tracks has remained similar to Riggin’s original invention.

Eliza Murfey
Focusing on the mechanics of the railroad, inventor Eliza Murfey created devices designed to improve the bearings on rail wheels. With sixteen patents for her lubrication system, it was Murfey who designed the packings that would lubricate the axles with oil, aiding in the reduction of derailments caused by seized axles and bearings.

Mary Walton
Steam engines were loud and emitted large plumes of sock as they moved down the rail lines. In 1879, Mary Walton developed a method to deflect factory smokestack emissions using water tanks. This technology was adapted for use on locomotives.

As many cities began developing mass transit systems in the 1800s, noise became an issue. To reduce noise pollution, Walton invented a sound-dampening system that cradled the railroad track in a wood box lined with cotton and filled with sand. She received a patent for the system on February 8, 1881, and later sold the rights to the Metropolitan Railroad of New York City.

Catherine Gibbon
Catherine Gibbon patented a new way of making track stronger and more efficient. Traditionally, track made at that time period included a large number of metal parts assembled at each joint. With no less than 28 separate pieces of metal at each joint, it required 25 individual holes. The Gibbon Double Girder Lap-Joint Track would change the industry, by limiting the number of parts needed.

Mary Anderson
While riding in a streetcar in New York during a snowstorm, Mary Anderson had an idea for something we often take for granted nowadays:  a windshield wiper to remove the snow and rain off of the windows to allow the driver to see better, and thereby increasing safety. Upon returning home to Birmingham, Alabama, Ms. Anderson sketched and built a wiper blade that did the work and was easily removable when not needed for use. The application was filed on June 18, 1903. On November 10, 1903, the United States Patent Office awarded Anderson patent no. 743,801 for her “Window Cleaning Device.” Unfortunately, Ms. Anderson’s invention was overlooked until the 1920s when they began to be put on car windshields. By this time, however, Mary Anderson’s patent had expired, and sadly, she did not receive any revenue from her invention. She did, however, took great pride in knowing that her invention saved countless lives and numerous limited frustrations.