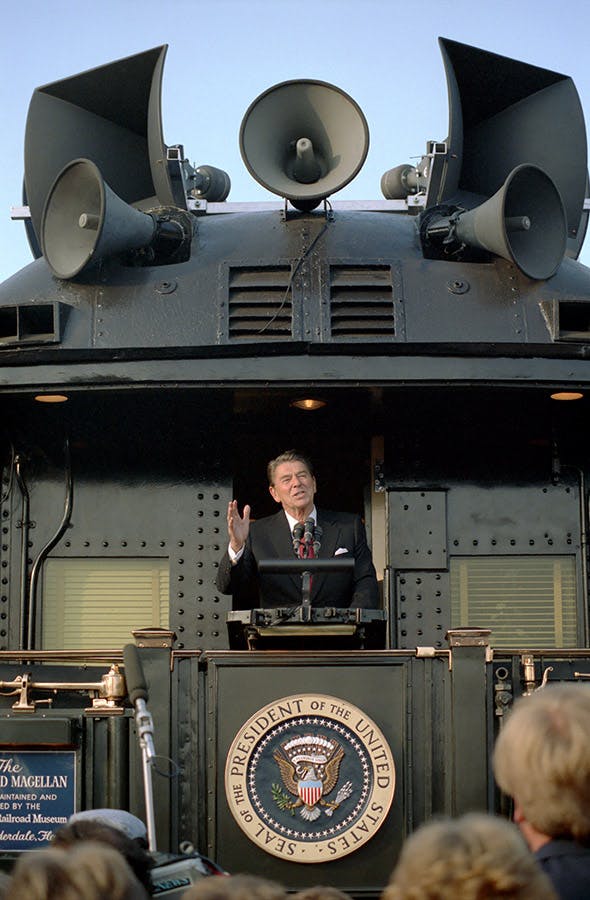 Before the days of Air Force One, when it came to presidential travel, the highest office in the union traveled by train. Using the rails to make campaign stops, visit with dignitaries, and attend to official business, trains played a huge role in the office of president. From Lincoln to Bush, there are many notable Presidential Trains in U.S. history:

The Lincoln Funeral Train
President Lincoln played a crucial role in the Transcontinental Railroad. He was the one who signed the bill authorizing the building of the route that would bridge the east and west coasts. It was only fitting that a train would carry him to his final resting place in Springfield, Illinois. 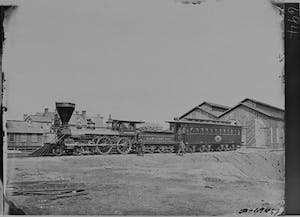 Courtesy of the National Archives

The luxury steam locomotive, built toward the end of the Civil War, started with a bit of controversy. The U.S. Military Railroad knew that the President would need transportation to travel throughout the country in in order to provide a sense of normalcy. However, during a time of war and financial struggle, Lincoln was opposed to spending money on what he deemed as a luxury.

With construction of the presidential car going forward, it was completed in 1865. Never used by Lincoln while he was alive, the train car was retrofitted quickly after his death to serve as a hearse that would take him on a 1,654-mile journey.

On April 21, 1865 more than 10,000 mourners watched as the train, with its nine cars, left Washington, D.C. The train passed through 180 cities in seven states. It made stops in major cities including Baltimore, Philadelphia, New York, Columbus, Ohio, and Michigan City, Ind. Coined “The Lincoln Special”, 300 people accompanied the President’s body. Also aboard was a coffin containing the body of his son Willie, who died in 1962 at 11 years-old from typhoid fever. After the long journey, father and son were finally laid to rest on May 4, 1865.

U.S. Car No 1
Originally called the Ferdinand Magellan, U.S. Car No. 1 was built by the Pullman Company in 1928 and later refurbished and presented to the office of the President in 1942. First used by President Roosevelt, the train car is 84-feet long, 15-feet high, and 10-feet wide. Housing a presidential suite, two guest rooms, a dining/conference room, and an observation lounge, the car was retrofitted for both safety and comfort. 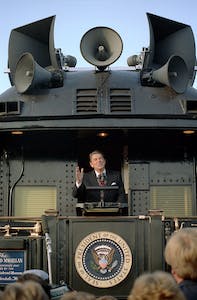 10/12/1984, Whistlestop Tour through Ohio, Presidents remarks at Ottawa on back of train Ferdinand Magellan

With safety always a precedent for anyone serving in the office of the president, security advisers suggested removing any distinguishing markings that would make the car stand out from other Pullman Cars. Not only did they have the car’s original name removed, but it was retrofitted with two escape hatches and armor plating on the roof, floor, and sides, as well as three-inch thick windows. The “presidential” version tipped the scale at 285,000 pounds (142 ½ tons), twice the weight of the car before modifications.

When it comes to traveling, comfort is always important, even more so with a president, like Roosevelt, who had a physical handicap. Keeping this in mind, small touches show up throughout the car, including in the president’s bedroom. Larger than the others, it also contains a commode chair built to make it more convenient for the president. There was also a smaller wheelchair construction to use on the train making mobility between rooms easier.

U.S. Car No.1 was used by FDR until his death in 1945 when once again the presidential car was part of the rail procession that delivered Roosevelt’s remains to his final resting place in his hometown. Following Roosevelt’s death, President Harry Truman continued to use U.S. Car No. 1. Most notable was for his 31,000-mile whistle-stop tour during the 1948 Presidential campaign. But there was a need for speed and with the weight of the train, the president looked at alternate transportation, frequently using the presidential plane, the Independence, a C-118 Liftmaster, which was later replaced by Air Force One, as the primary means of transportation. However, the majesty of this train lives on.

Presidents Eisenhower and Regan used U.S. Car No. 1 for limited and special appearances during their times in office. In 1984, Regan was the last president to travel aboard the car.

Union Pacific No. 4141 – George Bush Locomotive
On October 18, 2005 during a ceremony near the George Bush Presidential Library and Museum, the Union Pacific Railroad unveiled Locomotive No. 4141 named after and in honor of the 41st President of the United States, George H.W. Bush.

The locomotive, an Electro-Motive Diesel model EMD SD70Ace diesel-electric unit, was decorated to mimic the paint scheme of the current Air Force One. The design incorporated graphic elements from Air Force One’s wings and tail on the locomotive’s rear panel.

Standing 15-feet, 11-inches tall and weighing 420,000 pounds (210 tons), the locomotive holds up to 4,900 gallons of fuel and is equipped with a 4,300-horsepower engine allowing it to travel up to speeds of 70 miles per hour.  Part of the company’s operational fleet, No. 4141 delivered shipments across the 23 states serviced by Union Pacific, until it was removed from service in 2008.

Like presidents before him, it would be a train that would bring the 41st president to his final resting place after his death in 2018. In honor of the years of service, Union Pacific brought UP No. 4141 George Bush Locomotive out of storage and sent to Houston where it participated in Bush’s funeral train that ran from Spring to College Station, Texas. 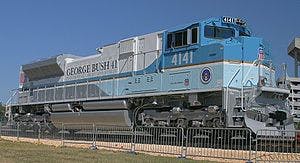 In 2019, the Union Pacific donated locomotive #4141 to George H.W. Bush Presidential Library and Museum. The locomotive will be housed in a $2.5 million pavilion near the front of the facility. The new exhibit is tentatively scheduled to open in 2020.

An unusual fact about this presidential locomotive: George H.W. Bush actually took the throttle and operated the locomotive while it was still in service.