Jane Austin. Susan B. Anthony. Rosa Parks. All three of these women were pioneers. Austin was one of the first widely published female authors; Anthony led suffragettes fighting for the right to allow women to vote; And Parks is a female icon in the civil rights movement. One name not as well known in history is that of Olive Wetzel Dennis.

Dennis was not only an early female civil engineer, but also a quiet pioneer in the railroad industry, becoming the first woman to join the American Railway Engineering Association.

Born on November 20, 1885 in Thurlow, Pennsylvania., she showed prowess and fascination for engineering early in life. Tired of her using his tools, Dennis’s father gifted her a set of her own at the age of 10 years old. She would use these tools to build furniture and houses for her dolls as well as toys for her younger brother, including a streetcar with trolley poles and reversible seats.

After graduating from Western High School, Dennis went on to Goucher College in Baltimore, Maryland, where she graduated with a mathematics degree in 1908 and went on to earn her master’s degree in mathematics and astronomy from Columbia University in 1909. 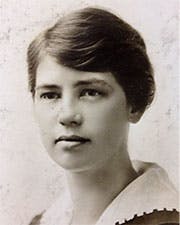 For the next ten years, she lived and worked as a teacher in Washington, D.C., but engineering was always on her mind. Starting with two summer sessions at the University of Wisconsin, she transferred to Cornell University in 1919, where she graduated with a degree in civil engineering a year later. She was the second woman to receive an engineering degree from the prestigious university.

Asking for What She Wants
Armed with a degree, Dennis struggled to find employment, as many companies were reluctant to hire a female engineer. Described as spirited and determined, she did not give up. Instead, she marched into the office of Daniel Willard, the president of the Baltimore and Ohio Railroad (B & O), and boldly asked him for a job.

Taking a chance, Willard hired Dennis as a draftsman to design and build bridges in rural Ohio. It was a position she would not hold for long. With the advent of cars and intercity buses, railroads were looking for a way to recapture or retain declining revenue from reduced passenger travel. Willard was of the mindset that if women wanted to ride trains, men would follow; and who better than a woman to help create an environment that other women would enjoy? Creating the position “Engineer of Service,” Olive Dennis would work for the Baltimore & Ohio Railroad under that title for the next 20 years where she made improvements to railroad travel until she retired in 1951.

A Pioneer in “Quality” Improvement
During her tenure with the B&O, Dennis traveled an average of 50,000 miles per year, experiencing what other passengers experienced, observing them, and asking questions. She was both a social researcher and a design engineer. Taking the feedback from passengers as well as her own experiences, she made recommendations to the railroad that would help revolutionize the passenger experience.

When it came to the passenger experience, Dennis was meticulous. Researching the best mattress for durability and comfort, she rode the B&O’s route to Chicago, Illinois., and just so she could sleep twice on the train, testing one bed each way.

From reclining seats to lowering the seat height and adding footrests for shorter passengers, there was no comfort that Olive Dennis overlooked. She created and implemented numerous quality improvements to enhance the passenger experience. She invented a type of stain-resistant material that was easier to clean. For those passengers who needed rest, she developed single reclining seats and had overhead lighting installed. For traveling families and moms traveling alone with some children, she had bassinets and bottle warmers added to the train cars. It was also her recommendation that had the railroad add stewardesses or nurses on all their train cars. When one of the businessmen traveling complained of falling asleep after eating dinner on the train – rather than working as he had planned – she recommended an ala-cart option for dining that included lighter meal options.

But it was a patent for the Dennis Ventilator that would make a fundamental difference to passenger comfort and led the Baltimore & Ohio Railroad to become the first to add air conditioning to its trains in 1931.

Before the invention of the Dennis Ventilator, railroad cars were equipped with screens to keep out cinders and, to some extent, provided ventilation to bring in fresh air. While the screens protected passengers from the cinders, the open windows provided a breeze-like effect that was more of a draft, forcing most passengers to keep the windows closed.

The patent filed with the U.S. Patent Office on December 13, 1927, showed the Dennis Ventilator to be universally usable by rigidly attaching the equipment to the car body. This eliminated the possibility of leaky joints as well as kept cinders outside of the car. Easy-to-clean, the new ventilator did not obstruct the view from the window, and passengers were able to control airflow with little exertion, easily allowing each individual to manage the flow of air. 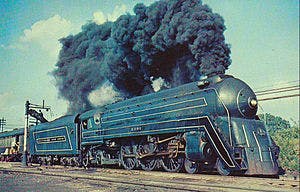 The streamlined steam Cincinnatian in 1956 – Wikipedia

The pinnacle of Olive Dennis’s career was the Cincinnatian, which entered service in January 1947, and would include all the improvements she developed during her tenure with the railroad.

Redesigning four P-7 “President” class Pacific locomotives, it was her change to roller bearings on all the axels and larger six-axle tenders that re-classed them as P-7d. She also added a streamlined shroud covering the front of the engine creating a sleek cosmopolitan profile.

Old heavy-weight cars  were gutted and reconstructed as streamliners for the train. Using the blue and gray color scheme developed by Otto Kuhler, Dennis incorporated the color scheme on the engine and tender in a pattern featuring horizontal stripes and angled lines.

Initially operating between Baltimore, Maryland and Cincinnati, Ohio, the route was unprofitable, and the railroad instead began running a day-route between Cincinnati, Ohio, and Detroit Michigan. The redesigned train would remain as the only B&O train to operate this route until the Cincinnatian was retired from service in 1971 when Amtrak took over.

A pioneer. A visionary. A trailblazer. Olive Dennis spent her life breaking down walls, leading the way for other female engineers who would come after her and revolutionize the passenger experience for all railroad travelers.