One Step Ahead of the Wrecking Ball

When was the last time you saw, no, experienced, a real, live, steam locomotive? Some of you may never have had the pleasure. Others among us will remember working aboard these fire-breathing beasts.

The steam locomotive has long-vanished from the American landscape. Trains, railroads in general, are no longer part of what we experience every day. Yet, they are woven so tightly into the imagery that represents us. 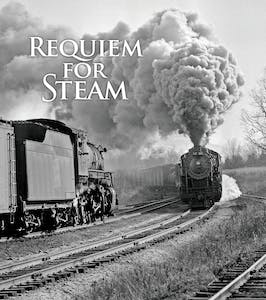 Photo by David Plowden; “Requiem for Steam” exhibit with the Center of Railroad Photography &Art

A photograph, capturing a fraction of a second, is sometimes all we have to remember a place, an event, a person or an object. This is almost the case with the steam locomotive, the passenger train, and a host of other railroad objects from as little as a half a century ago.

Photographer David Plowden has endeavored for over 50 years to capture this vanishing America.

“I have been beset, with a sense of urgency to record those parts of our heritage which seem to be receding as quickly as the view from the rear of a speeding train. I fear that we are eradicating the evidence of our past accomplishments so quickly that in time we may well lose the sense of who we are,” states David Plowden writing for the Beinecke Library website at his alma mater Yale University.

Since 1962, Plowden has worked as a photographer and writer. He has more than 20 published photo essays chronicling boats, bridges, the Midwestern prairie, small towns, steel, barns and railroads. Born in 1932, Plowden worked briefly for the Great Northern Railway. Before striking out on his own, he assisted O. Winston Link, another great railroad photographer, and George Meluso, fashion industry cameraman.

“David Plowden’s work is sometimes compared to that of the great WPA photographers—Walker Evans, Bernice Abbot, Russell Lee, Dorothea Lange—but he’s been in the field decades longer than any of them were. What he has done is nothing less than capture a whole nation passing through fifty years of changes as momentous as those unleashed by the Industrial Revolution,” commented Richard Snow, editor of American Heritage magazine, in the forward of Plowden’s book, Vanishing Point.

Plowden’s photographs can be found in the permanent collections of 25 plus museums and libraries. He has been recognized with dozens of awards, grants, commissions and fellowships.

In the end, we stand face-to-face with a man and his photographs—a series of snap shots detailing moments long since passed. Here is the true story of David Plowden and the America he has witnessed. Or, in his owe words, “[I’m] an archeologist with a camera, [who is always] one step ahead of the wrecking ball.”