Each day participants will get a clue. You can find those clues by checking back on this blog or through the Museum’s social media accounts on Facebook and Instagram. Clues post at 1:30 p.m. CST. If you are using social media, we ask you to keep your answers secret and please do NOT post them online.

When you can identify the objects based on the clues, email your answer to [email protected]nationalrrmuseum.org. If you have the correct answer, you will be entered into a drawing for a FREE train ride when the Museum reopens.

Rules:
– All entries must be received by 5 p.m. on that Friday.
– Only one entry per person/household
– Train ride is only valid for the winner
– FREE train ride valid for one year

Answer: The Wisconsin 40&8 Box Car
This boxcar was part of the Train of Gratitude (Merci Train) after WWII. In the years following this war, U.S. Government relief efforts for the people of Europe were slow. In many areas, Europeans had suffered through the war and Nazi occupation. At the end of hostilities, citizens found themselves living in a devastated countryside among destroyed farm equipment and devastated manufacturing plants. They had little to no means to survive. U.S. Citizens, at the urging of newspaper reporter/radio commentator Drew Pearson, assembled a train of food and clothing for the people of Europe. Although not assembled in a single train, the goods gathered filled more than 700 boxcars. The Friendship Train, as it was called was devoid of corporate or government sponsorship. It was a grassroots effort.

Following the U.S. gesture, the people of France said thank you (merci). French citizens donated gifts – over 52,000 in all The gifts were placed in 49 40 et 8 boxcars and shipped to the U.S. One car was designated for each state. The cars arrived in New York, NY amid much fanfare. Celebrations and parades were held across the country as each car was delivered to its respective state. 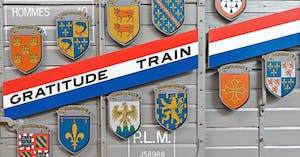 Clue 1: Leland did it
Image Clue:

Clue 2: Adam’s Ribs is near by
Image Clue: