Owney: The Dog That Traveled the World

There is something inherently special when it comes to stories about man’s best friend. From Homeward Bound: The Incredible Journey to Call of the Wild, whether the story is fiction or not, there is nothing more endearing than following the adventures of a loveable dog brings a smile to the face and joy to the world.

One such story is that of Owney, the Dog who traveled the world with the help of the Railway Mail Service trains. This adorable pup was a common sight at the post office in Albany, New York. It’s speculated that Owney would follow his owner to work at the post office each day. at his owner moved along, Owney was still dedicated to tracking down his friends at the post office. The sight and smell of a mailbag had him on the move – literally. 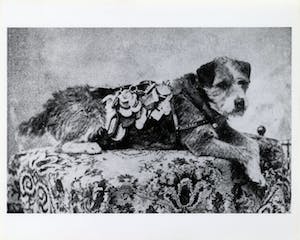 Owney followed the mail bags to the mail wagons, and eventually on to the mail trains where he would spend his days traveling across the country collecting souvenirs as he went. Gifted with medals, dog tags, even hotel room keys, they would be placed onto his collar. Having collected so many of these tokens, the weight on his dog collar got to be too much. Hearing about Owney’s challenges, Postmaster General John Wanamaker had a custom-made dog harness that would not only make it easier for Owney to carry them but would allow for more.

Becoming the official mascot of the Railway Mail Service was hard work. In 1895, Owney would take a trip around the world. The postmaster in Tacoma, Washington post office, sent him off on a goodwill mission as part of an advertising campaign to promote the city where he road trains and steamships throughout Asia and the Middle East before returning to Tacoma 113 days later.

Two years after his grand adventure, Owney got sick, making it harder for him to move and making him a bit ill-tempered. Needing to retire, a postal clerk in St. Louis, Missouri, invited Owney into his home, but his rambling soul wouldn’t allow him to stay in one place for too long, and he would make his way to Toledo, Ohio, in June of 1897. That would be Oweny’s last trip. He’d become too unruly and was ‘biting’ at the hands that fed him, so the decision was made to put him down. On June 11, 1897, Owney was put down by the local Sherriff.

With the money raised by mail clerks throughout the country, Owney was stuffed and mounted and put on display at the Post Office Department headquarters in Washington, D.C., until he was moved to his final resting place at the Smithsonian Institute in 1911.

Tales of Owney the Dog still fascinate people today. He has inspired a series of children’s books and traveling stuffed Owney’s used to teach geography to elementary students across the United States.