Rolling Along in the Red, White, and Blue: Patriotic Paint Schemes

When the bicentennial rolled around in 1976, the railroads celebrated the 200th birthday of the United States by painting engines in red, white, and blue. From clean basic lines to over the top designs, here are a few of our favorite patriotic-themed engines.

One of several engines painted by Conrail to celebrate the bicentennial, the CR 4800 GG-1 proudly boasted the colors of “Old Glory,” giving a whole new look to “Old Rivets.”

The first diesel Bicentennial engine to ride the rails, the Seaboard Coast Line U36B No. 1776, took on a decidedly “presidential” feel to its paint scheme.

The St. Louis Southwestern SSW9389 was one of three different units that the railroad painted to celebrate the birth of the nation. The regal design in red, white, and blue, featuring gold accents was the leading eastbound engine in the gateway to the west. 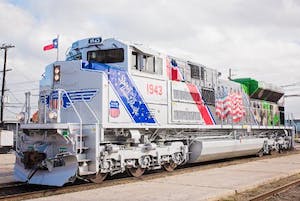 While it’s not a paint scheme designed for the Nation’s Bicentennial, the Union Pacific’s “The Spirit” was created in honor of those serving in the military and named for a Boeing B-17 Bomber that was sponsored by Union Pacific employees through a bond drive in 1943.