Almost since the dawn of the iron horse, there has been an urge to merge railroad companies. It has not always been out of sheer competition, but a way of economy and streamlining business. However, many of these mergers have also driven out the competition. Let’s explore the reasons behind mergers and look at a few major mergers and ones that didn’t quite make the cut.

Early on, the quest for efficiency was on most railroad owners’ minds. Most railroads were small and often had to hand off business to one another after just a short-haul over their tracks. Some railroads only went between a few towns and didn’t link up with anyone else. And some still had to compete with inland shipping. These were all factors on why some of the earliest railroads merged to form larger, more efficient companies.

Take, for example, the New York Central Railroad. The NYC was established in 1853 by the merger of ten small railroads in upper state New York. The Delaware, Lackawanna & Western, initially a local line running between Oswego and Ithaca, New York, was consolidated in 1870 by combining ten railroads from New York, Pennsylvania, and New Jersey.

By 1883 the U.S. rail system included 43 carriers whose individual systems exceeded 500 miles, of which five exceeded over 3,000 miles each! Between 1884 and 1888, an astonishing 400 consolidation agreements had been signed in the United States involving the railroads. The rise of the big railroads was just getting started by men such as Jay Gould, E. H. Harriman, and James J. Hill, to name a few.

The Interstate Commerce Commission was formed in 1887 to make sure mergers were fair and that railroads were not becoming a monopoly, which would raise prices and make unfair trading practices. When Hill attempted to join his holdings in Great Northern, Northern Pacific, and Burlington under the Northern Securities Company, the ICC and the Supreme court put a stop to it in 1904 and blocked the merger, as well as blocking a merger between rivals Pennsylvania Railroad and the New York Central. When Harriman attempted to merge a majority of railroads under one umbrella, the Supreme Court blocked him in 1913, as well.

However, by 1914 the industry’s economic health had begun to deteriorate. Carriers’ operation on over one-sixth of railroad mileage was in bankruptcy. It dawned on the United States government that there were too many railroads and that they had been overbuilt. When the World War came to America in 1917, the railroads were in such a mess that the Federal government took them over for the duration of the war and then some, finally returning them to private control in 1920.

In the 1920s, 30s, and 40s, many railroads went defunct or were bought up by others, usually big ones gobbling up the smaller ones. However, it wasn’t until after World War II that many of the large railroads began eyeing each other for a merger. Many were losing revenue in the postwar years in both passenger and freight service, due to availability of personal automobiles, bigger trucks, and the airplane. In fact, in 1946, the Pennsylvania Railroad recorded a loss for the first time in its 100-year history! 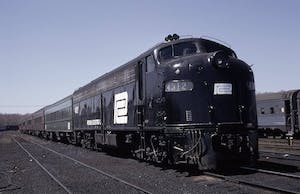 Pennsylvania Railroad would eventually merge with rival New York Central to form Penn Central. This would further go into bankruptcy and re-emerge as Conrail in the mid-1970s. Conrail would later be divided up in the 90s by CSX (successor to Chesapeake & Ohio and Baltimore & Ohio) and Norfolk Southern (successor to Norfolk & Western and the Southern Railway.)

One of the most interesting merger attempts was that of Union Pacific and the Chicago, Rock Island, and Pacific Railroad, commonly known as the Rock Island Line. For years, the UP had been trying to get a good route to Chicago, and the Rock Island was considered by many to be one of those “one railroad too many” type of railroads, serving in roughly the same territory as the Burlington Route but never attaining even a fraction of their revenue.

In 1958, no less than six Class I carriers served as eastern connections for the Union Pacific at Omaha, all seeking a slice of the flood of western traffic that UP interchanged there. Under the ICC revenue rules in place at the time, the Rock Island sought traffic from Omaha, yet preferred to keep the long haul to Denver, where interchange could be made with the Denver and Rio Grande Western, a connection to the Western Pacific for haulage to the West Coast.

The only option for Rock Island to grow revenues and absorb costs was to merge with another, perhaps more prosperous railroad. Overtures were made from fellow Midwestern line Chicago and Northwestern as well as the Milwaukee Road. Both of these never advanced much beyond the data gathering and initial study phases. In 1964, its last profitable year, the Rock Island selected UP to pursue a merger plan to form one large “super” railroad stretching from Chicago to the West Coast.

After ten years of hearings and tens of thousands of pages of testimony and exhibits produced, now-Administrative Law Judge Nathan Kinetic approved the Rock Island-Union Pacific merger as part of a larger plan for rail service throughout the West. Under Klitenic’s proposal, the Chicago-Omaha mainline, including most of the Rock Island, would go to the Union Pacific. The Kansas City-Tucumcari Golden State route would be sold to the Southern Pacific. The Memphis-Amarillo Choctaw route would be sold to the Santa Fe Railway. The Rio Grande would have an option to purchase the Denver-Kansas City line. However, now the times were changing.

During most of the ensuing merger process, Rock Island operated at a financial loss. In 1965, Rock Island earned its last profit. With the merger with Union Pacific seemingly so close, Rock Island cut expenses to conserve cash. Expenditures on track maintenance were cut, passenger service was reduced as fast as the ICC would allow, and locomotives received only basic maintenance to keep them running. Rock Island began to take on a ramshackle appearance, and derailments occurred with increasing frequency. To prop up its future merger mate, UP asked the Rock Island to forsake the Denver gateway in favor of increased interchange at Omaha. Incredibly, the Rock Island refused this, and the UP routed more Omaha traffic over the Chicago and North Western.

As a result, by 1974, the Rock Island was no longer the attractive bride it had once been in the 1950s. The Union Pacific viewed the expense of bringing the Rock Island property back to viable operating conditions to be prohibitive. Additionally, the ICC attached conditions for both labor and operating concessions that the UP deemed excessive. Union Pacific unilaterally walked away from the deal, ending the merger case.

In the end, Rock Island went bankrupt and had to have its assets liquidated. All assets had been sold, all debts had been paid, and the former railroad found itself with a large amount of cash. The company’s name was changed to Chicago Pacific Corporation to further distance itself from the defunct railroad, and their first purchase was the Hoover appliance company. In 1988, the Maytag Corporation acquired the company, making the railroad officially washed up!

Another interesting, proposed merger was that of the Santa Fe and the Southern Pacific, both prominent railroads in the Southwestern United States. Both had been very profitable until the 1960s. By the 1980s, they were looking to merge. It began with the merger of holding companies Santa Fe Industries and the second incarnation of Southern Pacific on December 23, 1983, to form the Santa Fe Southern Pacific Corporation (SFSP), which held the S.P. shares in a voting trust.

However, just because things look good on paper does not mean everyone agrees with the idea. The merger was opposed by the Justice Department in 1985 and denied in a 4–1 vote by the ICC on July 24, 1986, who ruled that such a merger included too many duplicate routes and was therefore monopolistic. The Commission denied SFSP’s appeal (again in a 4–1 vote) on June 30, 1987.

The holding company, ordered to operate the Southern Pacific at arm’s length until it sold it, disposed of it on October 13, 1988, to Rio Grande Industries for $1.02 billion and the assumption of S.P.’s debt, which consolidated the S.P. with its Denver & Rio Grande Western railroad under the Southern Pacific name. The holding company retained all the non-rail interests of both predecessors and shortened its name to the Santa Fe Pacific Corporation. 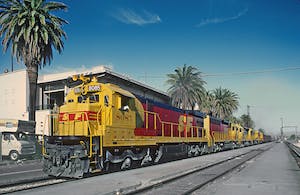 The powers that be were so confident enough that this would be approved that they began repainting locomotives into a new unified paint scheme, including the letters S.P. or S.F. and an adjacent space for the other two (as SPSF, the reverse order of the holding company). The locomotive livery featured the Santa Fe’s Yellowbonnet with a red stripe on the locomotive’s nose; the remainder of the locomotive body was painted in Southern Pacific’s scarlet red (from their Bloody Nose scheme) with a black roof and black extending down to the lower part of the locomotive’s radiator grills. The number boards were red with white numbers. In large block letters within the red portion of the sides were either “S.P.” (for Southern Pacific-owned locomotives) or “S.F.” (for Santa Fe-owned locomotives). The lettering was positioned on the locomotive sides so that the other half of the lettering could be added after the merger became official. Two ATSF EMD SD45-2s (ATSF #7219 and #7221) were painted with the full SPSF lettering to show the unified paint scheme after the merger was complete.

This paint scheme, combining yellow, red, and black, has come to be called the Kodachrome paint scheme due to the colors’ resemblance to those on the boxes Kodak used to package its Kodachrome slide film (which was heavily used by railfans of the time). At the time of merger denial, approximately 306 ATSF locomotives, four ATSF cabooses, 10 ATSF slugs, 96 S.P. locomotives, and one S.P. caboose had been painted in this fashion. After the ICC’s denial, railroad industry writers, employees of both railroads and railfans alike joked that SPSF really stood for “Shouldn’t Paint So Fast.”

One of the forces that drove mergers, especially after 1980, was the Staggers Rail Act. The Staggers Act was signed into federal law in 1980 and caused deregulation of the railroads and ultimately curtailed much of the ICC power. Revenues increased across the board, and efficiency was deemed necessary to help out the economy. Many weren’t worried about monopolies anymore, as long as the railroads were managed on fair shipping rates.

Another item that reduced the number of Class I railroads was the increase in the amount of revenue required of a railroad to be considered a Class I. On December 31, 1975, it was increased from $5 million per year to $10 million, reducing the number of Class I’s from 74 to 58. Subsequently, in 1978, revenue reporting was raised from $10 million to $50 million! This further reduced the number to 40 and down to 24 by the end of 1985.

Currently, there are only seven Class I railroads: Union Pacific, CSX, Norfolk Southern, Kansas City Southern, BNSF, Canadian National, and Canadian Pacific. Currently, there are talks between Canadian Pacific and Kansas City Southern about a potential merger that would give each control over lines well out of their current territories. This would effectively reduce the number to six Class I’s, down from a couple hundred when classification began in 1910.

Railroads have come a long way in their nearly 200 years of operation. Many have come and gone; some exist only on paper or as a subsidiary of another major railroad. To stay productive and competitive, these mergers were needed. Mergers can be a good thing, as long as the right people operate the new company in the right way. Then everyone wins!