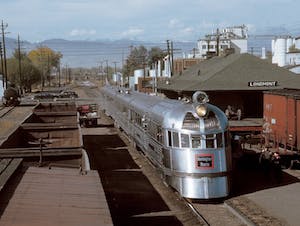 One of the railroad presidents who faced this challenge was Ralph Budd, president of the Chicago, Burlington and Quincy Railroad, the Burlington or CB&Q, who sought to develop a more efficient high-speed train to replace conventional steam-powered heavyweight equipment. The project hinged on two major elements, developing lighter railcars and developing an internal combustion-driven power system adequate for high-speed service.

The Chicago, Burlington & Quincy is often credited with kicking off the streamliner revolution in the United States. While its Pioneer Zephyr, also often referred to as the Zephyr 9900, was not the first streamliner introduced to the public it did garner the greatest public attention. The Union Pacific’s M-10000 had debuted a few months prior to the unveiling of the Pioneer Zephyr, however, many agreed that the sleek lines and overall styling made the Pioneer Zephyr far superior.

When Ralph Budd and Edward Budd (no relation) met in 1932, the golden age of railroads had long since faded. Edward Budd was an auto body manufacturer from Philadelphia, who joined forces with Ralph Budd to revive their industry and increase its revenue. Ralph Budd sought improvements in speed, efficiency, and appearance; Edward Budd brought this vision to life with his innovative use of stainless steel and streamlining.

Simultaneously, Charles Kettering of General Motors was experimenting with perfecting the diesel locomotive engine. Inspecting the efficient and reliable engine at the 1933 Chicago World’s Fair, Ralph Budd recognized this as the engine that would propel his lightweight train out of the gate. Budd’s idea for using diesel dated back to the 1920s where he first saw them employed in early small switchers of the time (probably one of the first boxcab models).

Officially, the CB&Q placed an order from Budd for the Zephyr on June 17, 1933, for a three-car, articulated trainset that would be powered by a 660-horsepower model 201-A prime mover from Winton. The 201-A would later evolve into the 567, built by the Electro-Motive Division, the railroad division of General Motors, becoming the primary mover of many early diesel locomotives for the next two decades. While Budd could fabricate the car body, somebody actually had to come up with a design.

That was tasked to Albert Dean, an aeronautical engineer who worked for the company. His design featured a shovel nose power car that included a significantly raked lead windshield. The entire train was sheathed in stainless steel and one could barely even see the wheel assemblies.

The streamlined look of the Zephyr would never have been possible without the recent development of shot-welding, another patented concept the Budd Company mastered. This version of welding enabled stainless steel to be welded together using high amp electric current that actually created a bond stronger than the steel itself. Now able to mold, bend, and form stainless steel into whatever shape it wanted Budd could design endless types of railroad equipment.

Overall, the train was 197 feet long and could hold 72 passengers, 44 fewer than the Union Pacific’s M-10000. Its consist included a Railway Post Office (RPO), baggage-coach, and a coach-parlor observation. However, what it lacked in space it made up in luxury and definitely appearance. Nothing could compete with the flashy, sleek designs of the Zephyr.

Ralph Budd, as savvy a marketer as an engineer, organized a publicity stunt for his train that would allow it to capture the American imagination. On May 26, 1934, the Burlington Zephyr made its dawn to dusk run, from Denver to Chicago, breaking the record for nonstop train travel and speed. The train left Denver at 7:04 am Central Daylight Time and arrived in Chicago at 8:09 pm, thirteen hours and five minutes later, one hour fifty-five minutes faster than scheduled.

From Chicago Union Station, the trainset went on display at the 1934 Century of Progress fair. After the fair, it started a thirty-one state, two hundred and twenty-two city publicity tour, during which more than two million people saw it. The Zephyr completed the trip in just over 13 hours, ushering in a new height of train travel and style. Its sleek Art Deco form was soon to be mirrored in everyday items from transportation to toasters.

As more Zephyrs were built, new routes cropped up around the Midwest. With speed and economy firmly in hand, the Burlington began to seek ways of improving service. In total, eight more trainsets were purchased, #9001-#9008: #9001 and #9002 were referred to as the Morning Zephyr and Afternoon Zephyr (or the Twin City Zephyrs); #9003 as the Mark Twain Zephyr; #9004 and #9005 as additional Twin City Zephyrs; #9006 and #9007 as the Denver Zephyrs; and #9008 as the General Pershing Zephyr.

By 1941, the Burlington introduced all-female Zephyrettes, a staff of on-board hostesses, adding passenger comfort to the list of luxuries at which the Zephyrs already excelled. In 1948, the Federation for Railway Progress awarded the Burlington the Passenger Service Award for 1947.

By the 1950s, the passenger rail business was suffering an irreversible decline. From 1946 to 1965, passenger volume plummeted from 790 million to 298 million. Retired in 1960, the original Pioneer Zephyr was donated to the Museum of Science and Industry in Chicago, where one can marvel at the zenith of luxury and finesse that was associated with train travel in the 1930s and 1940s. The Budd Company built several more Zephyr style trains for the Burlington Route, including the Silver Spirit parlor and observation car that can be seen at the National Railroad Museum, and if you’re lucky enough, you may even get to take a ride in it during one of the museum’s many events.

Though retired from service 26 years to the day after its triumphant run from Denver to Chicago, the Pioneer Zephyr has long remained a shining symbol of the streamliner era.