The 1800s were a booming time in the history of the United States railroad industry. The nation was expanding west, and the frontier began to close. Following the Civil War and the Transcontinental Railroad completion, a major driving factor in the country’s economic growth was the railroad industry. Privately owned and unregulated, railroads controlled the when, the where, the who, the what, and the how much for all the products shipped throughout the nation.

With the power to set prices and exclude competitors and control the market in several geographic areas, regional railroad monopolies had commerce at their mercy. During the mid-1880s, stories and complaints about price discrimination for both passengers and freight shipping ran rampant. The American farmer was the most affected by these monopolistic practices.

Home on the ‘Grange’
Founded in 1867 by Oliver Hudson Kelley, the National Grange of the Order of Patrons of Husbandry was created to bring American farmers together to create a more uniform standard of agricultural practices that could improve farming methods and create efficiencies to improve profit margins. Within three years after establishing the coalition, Grangers were in almost every state and boasted 800,000 million farmer members or granges. 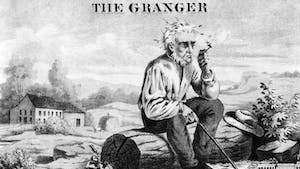 The Granger movement, lithograph from 1873. Image from Library of Congress, Washington, D.C.

Due to a dependence on outside markets to sell their products, farmers relied on the railroads and grain elevators to transport crops. With many of the grain elevators also being owned by the railroads, farmers faced price gouging for their services. Grain was often weighed and graded without supervision. The farmer who chose to skip elevator service would find themselves left ‘holding the bag’ as there wouldn’t be a train car available to them.

Believing that the railroads were systemically abusing their economic power, the Granger movement started calling for railroad regulation, receiving the most support from its base in Illinois, Wisconsin, Iowa, and Minnesota. With extensive lobbying and pressure on state governments, Illinois would be the first state to see a law enacted to regulate railroads and grain storage companies. Called the Granger laws, this legislation set a maximum rate that could be charged to farmers. It wasn’t long before Wisconsin, Minnesota, and Iowa would follow suit and create similar legislation.

After the opposing arguments were heard, the Granger law was upheld with a 7-2 judgment for the state of Illinois. The justices ruled that the government could regulate businesses serving the public interest. The ruling in Munn V. Illinois would later set a precedent for future regulator processes.

The ICC had a troubled start. No sooner than it was it created, the railroads began to fight back, taking the ICC to court, where many cases ended up in front of the Supreme Court. Rulings weren’t always favorable for the Commission. By 1906, the Supreme Court had ruled in favor of a railroad company in fifteen out of the sixteen cases. These rulings crippled certain powers that the ICC may have had.

Over time Congress expanded the Commission’s powers through additional legislation. They passed the 1893 Railroad Safety Appliance Act, which gave the ICC jurisdiction over railroad safety, removing this authority from the states. In 1906, The Hepburn Act would provide the ICC with the ability to set maximum railroad rates and extended the agency’s authority to include bridges, terminals, ferries, sleeping cars, express companies, and oil pipelines.

One controversy from the Act was in interpreting the verbiage that banned long haul-short haul fare discrimination. It would be the Mann-Elkins Act in 1910 that would provide clarification. This Act expanded the ICC’s authority over railroad rates and gave the commission jurisdiction to include regulation of telephone, telegraph, and wireless (radio) companies.

Further legislation continued to add items to the Commission’s responsibility. The Valuation Act of 1913 required the ICC to organize a Bureau of Valuation to assess railroad property value. The ICC would use this information to set rates. The Esch-Cummins Transportation Act of 1920 expanded the ICC’s rate-setting responsibilities, and the agency, in turn, required updated valuation data from the railroads. The enlarged process led to a significant increase in ICC staff, and the valuations continued for almost 20 years.

Some of the responsibilities seemed to not fit with the original mission and were pawned off to other entities. In 1934, Congress transferred the telecommunications authority to the new Federal Communications Commission. In 1935, Congress passed the Motor Carrier Act, which gave the ICC further reach, allowing them to regulate interstate bus lines and trucking as common carriers.

Starting in the 1940s and up through the 1960s, the ICC would find itself involved in several civil rights related racial discrimination lawsuits, and not always on the side of civil rights. In at least two landmark cases, the Commission sided with the railroads rather than with the African American passengers who had filed complaints.

On June 5, 1950, in Henderson vs. the United States, the Supreme Court ruled to abolish segregation of reserved tables in railroad dining cars. The Southern Railway had reserved tables in such a way as to allocate one table conditionally for African Americans and multiple tables for white passengers. Well, it turns out that a black passenger traveling first-class was not served in the dining car as the one reserved table was in use, thereby violating the rules set up by the railroad. The ICC ruled the discrimination to be an error in judgment on the part of an individual dining car steward. Both the United States District Court for the State of Maryland and the United States Supreme Court disagreed, finding the railroad’s published policies to violate the Interstate Commerce Act.

Deregulation and Decline of the ICC
By the 1970s and 1980s, the government had begun a series of deregulation and allowed businesses more freedom with less oversight. Congress passed several measures that reduced the Commission’s authority, including the Railroad Revitalization and Regulatory Reform Act of 1976 (the 4R Act) and the Staggers Rail Act of 1980. Several members of Congress advocated for its dismissal, which finally occurred with the ICC Termination Act of 1995. Many of the functions were transferred to other entities, most notably the U.S. Surface Transportation Board and the Federal Railroad Administration.

The law’s terms often contradicted one another. Some provisions were designed to stimulate competition, and others to penalize it. In practice, the law was not very effective. The most successful provisions of the law were the requirement that railroads submit annual reports to the ICC and the ban on special rates the railroads would arrange among themselves. However, determining which rates were discriminatory was technically and politically challenging.

The ICC served as a model for later regulatory efforts. Unlike internal affairs commissions set up in-house of a company or government body, the seven Interstate Commerce Commissioners and their staff were full-time regulators who could have no economic ties to their regulated industries. Since 1887, some state and other federal agencies have adopted this structure. And, like the ICC, later agencies tended to be organized as multi-headed independent commissions with staggered terms for the commissioners. At the federal level, agencies patterned after the ICC included the Federal Trade Commission (1914), Federal Communications Commission (1934), and the National Labor Relations Board (1935), to name a few.