Snow removal on the railroad is a job that has been around since the earliest railroads themselves. Railroads were expensive investments; it was a given that they should operate all year long. However, once Old Man Winter starts spreading the snow around, it is exceedingly difficult for trains to run on the rails. Some trains could push through, but as the snow began to build up, they would often get stuck or even derail at times.

One of the earliest methods for clearing snow from the tracks was for teams of men to go out and shovel the tracks by hand. It was time-consuming and took workers away from more important railroad projects. Something needed to be done, especially as American railroads began to move west, where the snow only got deeper, particularly going through the mountain passes on the Transcontinental Railroad.

The first surveyors of the transcontinental railroad thought the snows could be handled with the equipment available at the time. They used “Bucker” snowplows pushed by six to nine wood-burning locomotives. It worked fine with fresh powder snow, but once the snow thickened to “Sierra Cement,” the operation literally derailed. Still, the railroad used the Buckers as much as they could.

Even before completing the Central Pacific Railroad, the railroads built snow sheds to protect the railroad over the top 30 miles of the Sierras. These sheds and the Bucker snowplows kept the line open during most of the winter, but the snow sheds were beset with fire and avalanches problems. And, while useful, the big snowplows were operational headaches. 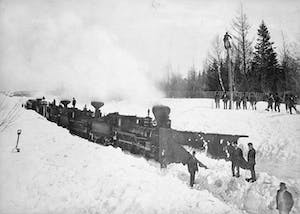 The wedge plow was one plow railroads used to clear the tracks of snow. It was an improvement of the old Bucker plows. The plow is attached to the front of a customized railcar that houses a pilothouse for a spotting crew.

Unlike the plow’s municipalities use to clear public streets, the wedge plow is one of the least used pieces of snow removal equipment used by the railroad. It’s design and size make it the workhorse of the snowplows. The wedge-type plow is brought out only when large amounts of accumulating snow, anywhere from several inches to several feet.

One of the most common types of wedge plows were those built by the Russell Snowplow Company, which began manufacturing the machines after World War I. Developed with a bit of versatility, Russell’s are equipped with wings attached to the outside of what was known as the “tongue” or the wedge device that plowed the snow clear of the track.

Initially made from wood, these plows are now constructed using reinforced iron or steel. Unable to sell propel, it is pushed down the tracks at speeds up to 50 miles per hour, making it one of the primary reasons that these plows aren’t used as much today. Coupled with the fact that to get up speed, you need multiple locomotives, increasing the operating costs. 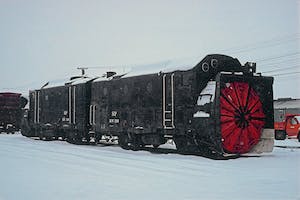 In the 1850s, the initial prototype for a rotary plow was developed. These plows could clear more substantial amounts of snow and unbury rail lines stuck under deeper snowfalls than the wedge plow, making them the newer and better way to remove snow and keep the tracks clear.

With its fan-style design, the first rotary plows, while not self-propelled, were driven by a steam engine, making them a safer option as they could be pushed down the tracks at slower speeds. However, because they required a steam locomotive, it required full staffing, which made it an operationally expensive piece of equipment.

The first design of a rotary plow was done in 1850 by a Canadian dentist based in Toronto named J.W. Elliot. Elliot sold his concept to Orange Jull, who worked on a full-size prototype that featured two fans spinning in opposite directions. However, the rotary was not perfected until Jull sold the rotary design rights to John and Edward Leslie in 1883. Jull’s initial design worked by using two large fans that spun in the opposite direction of one another at the desired rpm with the two fans working in tandem; the outer-most set sucked the snow into the blades while the second fan deposited the snow out of a chute located above. The Leslie’s perfected and simplified this initial design by using a single fan that could trap and scoop the snow and then depositing it out of the chute.

The main advantage of rotary plows was that they could move tremendous amounts of snow and clear lines that were buried in far deeper snowfall totals (even heavy, wet snow) than wedge plows. Not only could the fan design move more snow than the simple wedge, but the fan also itself was driven by a steam engine, giving it the power to move all of that snow. A rotary still had to be pushed by a trailing locomotive just like a wedge plow. However, it could do so at much slower speeds, which was much safer for the spotting crew, who did not have to feel like they were on a roller coaster ride zipping along down the line.

However, due to their high fuel consumption, they proved very expensive and were only used when necessary. Even when the redesigned equipment made the jump to diesel power, it still proved too costly to operate regularly and were replaced with more efficient types of units.

With its wedged front and air-compressed wings or flaps, the Jordan Spreader is a combination spreader-ditcher designed in the 1890s by a British immigrant to Canada, Oswald F. Jordan. Receiving his first patent in 1891, Jordan worked at Canada Southern until 1898, when he moved to Chicago, Ill., to set up his business and supervise the construction.

A sole proprietorship, Jordan’s company eventually be helmed by Walter J. Riley, who took over running the business upon Jordan’s death in 1910. In 1914 “Colonel Riley,” a nickname given to the new president, ran the company until he retired in 1960.

With its high glassed-in cap, the spreader is operated by a separate crew. Like it’s other snow removal counterparts, the Jordan Spreader is unpowered, requiring several locomotives to propel them along the tracks.

For snow removal, the ‘wings’ are extended up to 12 feet using compressed air cylinders and pushed down the track, creating plumes as it plows the snow from the rails. During the warmer weather months, the spreader is adjusted to work behind a string of hopper cars that unload the ballast while the wedge front and the wings smooth and level it along the tracks.

Ballast Regulators
Through technological advancements, the popular Jordan Spreader is being replaced by Ballast Regulators. With the need to control operational costs, Ballast Regulators are self-propelled and are not only being used as a combination ditcher, ballast grader, and track grew machine. This piece of equipment is also being used for snow removal.

Since it doesn’t require a locomotive to push it, there’s less manpower required, making it a premium option to clear the tracks of snow as well as spread new ballast. 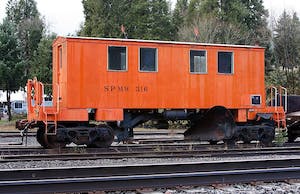 While a wedge plow can remove snow above the rails’ surface, the flanger removes snow and ice from below the surface of the rails where the railway wheel flanges fit. Locomotives and cars can be derailed if the flangeway, the opening parallel to a rail that permits passage of the wheel flanges, is filled.

The flanger blades are lowered below the head of the rail. Blades typically throw the snow and ice to the left of the left rail and the right of the right rail. Some flangers have a single V-shaped blade extending between both rails, while others with a separate blade for each rail are better adapted to lines with guard rails. Some blades work while the car moves either forward or backward, while other flangers have one blade for forward movement and a different blade for backward movement. While early railway wedge plows required a separate flanger, many modern plows also include flanger blades. Many locomotives are also equipped with flanges, as is the case of the National Railroad Museum’s No. 1563, an EMD SW-1500 donated by the Canadian National Railroad.

To avoid damaging the flanger blades, the operator must raise them when the flanger car approaches a railroad switch or crossing. In regions where flangers are often used, signs are posted alongside the tracks to alert the operators to raise the blade.

There have been various ways to get rid of winter’s mess on the railroads over the years, including using jet engines to melt the snow! Some are costly, some are time-consuming, and a few are even dangerous; however, they all get the job done. Whether it’s self-propelled or pushed along the track, one thing all these ultimate snow-throwers and movers have in common is the impressive nature in which they clear the tracks. With billowing plumes of snow in their wake, they are keeping the rail lines clear and railroads running on time, no matter the weather forecast.