It takes a lot to stop a train—distance, speed, and most importantly, the brakes. Throughout the early days of railroads, more than 650 patents were given to inventors for train brakes. Some were effective, others not so much.

In the mid-1800s, railroads relied heavily on handbrakes and sturdy brakemen to bring trains to a stop. The technology was not efficient as it took time to wind up the slack in the chains manually, and even if it took the crew 10 seconds to perform the job, a train traveling at 30 mph would have moved 440 feet. With most cars having handbrakes on only one set of trucks or wheels, a brakemen’s job was dangerous and the pay was very low. Thousands of brakemen died each year, many falling off the tops of railcars.

During the 1830s, another technology was introduced to the railroads. The steam brake, invented by George Stephenson, equipped many locomotives, but they weren’t an ideal solution as the cold temperatures would often lead to freezing. Another technology employed by the railroads was vacuum brakes. However, they proved to be cumbersome and lost pressure at higher altitudes, making this brake style impractical for trains running in higher elevations and mountainous regions.

Still looking for that ideal solution, it would be a young inventor from Central Bridge, New York, that would provide a promise of safer ways to stop a train.

The World of George Westinghouse
Growing up around his father’s farm implement shop, George Westinghouse served in the Union Army and as an engineer in the Union Navy. With a background in mechanical engineering, by the mid-1860s, Westinghouse designed and built two devices that would revolutionize the railroad industry. The first was a ‘car replacer’ that helped re-rail cars, and the second was a steel railroad frog for diverging trains at switches.

Traveling the country to promote his inventions, Westinghouse established strong connections in the railroad industry that would later serve him well when introducing his power brake system. 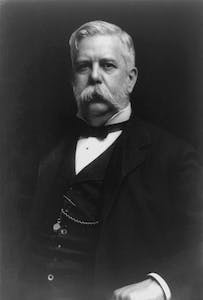 In 1866, Westinghouse found himself in Pittsburgh, Pennsylvania, working with a new foundry to produce his inventions. It was here that he started working on an apparatus consisting of a converted Worthington air pump, an air reservoir tank, and half a dozen cylinders that would be installed on the cars, along with all the necessary piping needed to make the system work. The air pump was powered by steam from the boiler, which compressed air to 70 psi in a reservoir. When a brake application was desired, a three-way cock or valve in the cab was opened that released the air from the tank, which flowed through a pipe into the brake cylinders on the locomotive, tender, and to the cars. The air pressure exerted a push on the brake-cylinder pistons connected through linkages to the brake shoes, and these were pushed against the wheels to slow the train, using air pressure to push brake shoes and add pressure to give friction to the wheels for the train to stop.

Putting this new technology to the test, Westinghouse turned to some of his connections, including W.W. Card, superintendent of the Pittsburgh, Cincinnati, Chicago, & St. Louis (PCC&StL) railroad. Card offered the use of a passenger train, having the new equipment installed, and in September 1868, in front of offices from PCC&StL and the Pennsylvania Railroad, the train made its first test run using the new braking system.

On the day of testing, Westinghouse was standing by to demonstrate his invention. In his own words, he is said to have remarked: “Upon its first run after the apparatus was attached to the train, the engineer, Dan Tate, on emerging from the tunnel near the Union Station in Pittsburgh, saw a horse and wagon standing upon the track. The instantaneous application of the air brakes prevented what might have been a serious accident, and the value of this invention was thus quickly proven, and the airbrake started upon a most useful and successful career.”

Westinghouse’s patent, No.88929, was issued on April 13, 1869, and the state of Pennsylvania granted the Westinghouse Air Brake Co. its charter on September 28 of that same year. By the early 1880s, Westinghouse had succeeded in putting his brakes on most of the wheels of the U.S. passenger-car fleet.

Several reasons exist as to why the straight air brake was quickly adopted. One is the public outcry for the need for safety, and travelers were becoming more choosey when it came to taking trains which they considered “safe,” those with air brakes and ones that were “unsafe,” those without.

Continuous Improvement
Even during the early years of its success, Westinghouse knew the system was far from perfect. The buildup of air took too much time to travel from the front of the train to the rear, making it less practical for longer trains. What was needed was a system that would work on a train of any length and put the brakes on automatically in case of a break-in-two. The solution he came up with was the reverse of the straight-air system; instead of using air to apply the brakes, he would use it to keep the brakes off.

There were a few components involved to make this happen. First was an air tank on each car, called the auxiliary reservoir, putting the air closer to the brake cylinder, where it could be supplied quickly, rather than traveling from the locomotive to apply the brakes. The second was a triple valve to control the three states of the braking system: charge, apply, and release. With a little more fine-tuning, it is very similar to the way air brakes are used today.

While most railroads had installed air brakes on their passenger-car fleets by 1877, comparatively few were using them on freight trains at that time. Westinghouse began offering discounts of up to 20% for freight railroads and would often buy up any competitors that tried to compete with him, effectively giving his company a monopoly in the air brake market.

By 1885 about 800,000 freight cars were in service around the country, and the cost to convert a freight car with airbrake sets was about $40 a car. However, there was an outcry from the public and unions, which convinced many in Congress that something needed to be done. 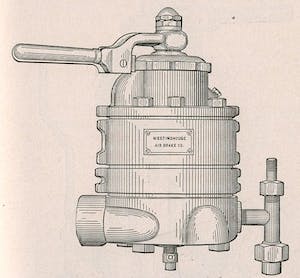 In the late spring of 1889, the newly formed Brotherhood of Railroad Brakemen petitioned the federal Interstate Commerce Commission to adopt the air brake and Janney coupler. Most railroads opposed any compulsory legislation, even the ones who had already bought air brakes for their freight-car fleets. But in the 1892 presidential election, it became a campaign issue, and in 1893, the Safety Appliance Act became law, requiring the railroads to install air brakes and automatic couplers per Master Car-Builders’ Association standards by 1898. When this wasn’t met, Congress did grant a two-year extension, but petitions for a second extension were denied. By 1900, after 30 years of hard work, legislation was in place to put airbrakes on the wheels of all the nation’s freight cars.

In the end, the railroads and customers both benefited greatly, as well as the men working on the trains. The results were longer trains running at higher speeds, a marked drop in rail freight rates, and greater safety.

The mass adoption of air brakes enabled Westinghouse to keep growing his company. After 20 years in business, the company moved to the larger and more modern plant in Wilmerding, PA, in 1889. The works for this plant comprised over nine acres of floor space. The works and the yard together occupied approximately thirty acres. In 1905, approximately 3,000 workers were employed, and the output was 1,000 brake sets per day.

Westinghouse made many alterations to improve his invention leading to various forms of the automatic brake. By 1905, over 2 million freight, passenger, mail, baggage, and express cars and 89,000 locomotives were equipped with the Westinghouse Quick-Action Automatic Brake.

Leaving a Legacy
The town of Wilmerding, popularly known as “the home of the air brake,” became centered around the workings of the Westinghouse Company, as its fortunes rose and fell with that of the company. The Westinghouse Company even built houses for its employees and buildings for town activities.
George Westinghouse died in 1914 but left a legacy that branched out from railroad air brakes into other ventures covering the fields of turbines, railroad locomotives, and even nuclear energy.
The air brake Westinghouse invented revolutionized safety in transportation and increased proficiency within multiple sectors of freight and passenger carrying entities. The innovation continues today, and the name Westinghouse lives on in safety, efficiency, and good, old-fashioned know-how.