Taking Trains into the Future

When you think back to a time that was not only nostalgic but filled with hope and innovation, most people flash back to the 1950s and 1960s. More and more households owned a car, had a television set, attended sock hops, and by the end of the decade we were looking towards outer space.

Postwar America was looking up. The National Highway System was completed in the 1960s and with it, the automotive boom and the so-called the lure of the open road. With the ability to fly by airplane farther, faster, and to far-off destinations, passenger  train travel was on the decline, leaving railroads scrambling to recapture the numbers they enjoyed during the railroads heyday in the mid-1920s. Banding together, several railroads creatively found what they thought would be the solution.

Cars, Busses and a Train Oh My! – It is All About the Design
Turning to automotive innovators like General Motors, a handful of railroads challenged its Electro-Motive division to create a high-speed train with a design that would rival the sleek look of the GM cars that the company manufactured, and would contain the affordable luxury that appealed to the American public.

In charge of the exterior development of this train, Charles Jordan, an automotive designer from GM, took several hints from the auto industry to develop the aesthetic look of what would become the Aerotrain. Finding inspiration in some of the most popular cars of the 1950s, he fashioned the front end after a Buick LeSabre; the tail car was modeled after the back end of a 1955  Chevy Nomad station wagon. 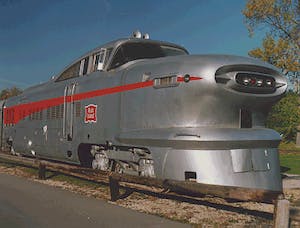 To keep construction affordable, GM looked for objects and designs already in place, including the inner-city bus. The company widened the width of the traditional bus passenger coaches to match the locomotive. This provided more room for passengers, increasing the seating comfort. This was not the only inspiration from bus transportation. The design team also added luggage racks over the passenger seating, double-reclining seats with reading lights, and bathrooms on every coach car, and compartments under the floor that could be loaded and unloaded from outside.

With a lower center of gravity and only two axles, the weight of the coach could be reduced allowing it to negotiate curves at a higher speed and provide a better view for the passenger. Constructed from aluminum and shorter than standard coaches, the weight was reduced by about 50 percent. With its air suspension and high speeds, coupled with the reduction in weight, GM touted that they were would be able to cut operational costs from $2500 per seat to just under $1000, reducing railroad operating expenses.

The public had its first look of the Aerotrain when its concept art appeared in the June 1955 issue of Look magazine. Described initially as “Train Y”, the article took readers to the future of railroad travel by  illustrating a sleek looking train and touting operational speeds that were greater than 100 miles per hour as it ran between New York, N.Y. to Chicago, Ill. Based on the initial introduction to the public, the aesthetic design was considered a success.

Taking it for a Test Drive
By the end of 1955, the design finalized and in development at GM where engineers worked to meet the promise of efficient and cost-effective high-speed travel for the trains debut that was scheduled for February 1956.

Starting with an SW1200 switcher locomotive, the Aerotrain was equipped with a true 567C 12-cylinder diesel engine as a prime mover and had an output of 1200 horsepower. Using a new sheet metal design, the engine was rechristened as the LWT-012. LWT stood for lightweight; 12 stood for the 1200 horsepower it produced.

GM manufactured two demonstration models of the Aerotrain, each with 10 passenger cars. The plan was to lease the trains to the railroad before they manufactured more. The first train went to the Pennsylvania Railroad making the Pennsy Aerotrain the first one to hit the rails, running between New York, NY and Pittsburgh, PA.

The second train, operated by New York Central, ran between Cleveland, Ohio. and Chicago, Ill. The trains were tested by two other railroads: the Santa Fe and the Union Pacific.

Falling Flat
Despite the claims made by General Motors, the ‘futuristic’ train did not save the industry. Logging more than 600,000 test miles, there was little fanfare by the railroads themselves. Riddled with passenger discomfort and maintenance issues, the train was a viewed as a flop.

Far too light to travel smoothly over the rails, the train did not offer the comfortable ride passengers were expecting. At any speeds above 75 miles per hour, the air bellows would depress and could not absorb shock. There was also the issue that the locomotive was underpowered and had difficulty accelerating to reach its intended fast cruising speeds of nearly 100 miles per hour, despite pervious engine adjustments. The Aerotrain also had problems traveling through mountainous areas.

However, the Aerotrain would find its place. The Rock Island Railroad saw the potential in using them as commuter trains and purchased them from General Motors when they were returned to the company in 1957. Becoming an attraction in Chicago, the Aerotrains would become one of the most popular commuter trains, operating until they were officially retired in 1966.