The Day the Towers Fell

It was a gorgeous sunny day in September. Schools were in session; the leaves were starting to change colors. It was the perfect day in late summer. All seemed right with the world, and the day was filled with promise.

At 8:46 a.m., the entire country would come to a screeching halt as the first of two hijacked planes crash into the World Trade Center, striking the North Tower. A short 20 minutes later, a second plane crashed into the South Tower of the World Train Center.

It was only 14 minutes after the last plane hit the World Train Center that everyone glued to their television sets learned that Flight 77 crashed into Pentagon in Washington, D.C.

Not since December 7, 1941, was there an attack on U.S. soil when the Japanese bombed Pearl Harbor and pulled the country into WWII.

Like many others, I can still recall what they were doing when the first plane hit in New York City. I was watching a friend’s daughters while they were out of the country on a trip. I’d just dropped the baby off at the sitter’s when the sitter asked me if I heard. 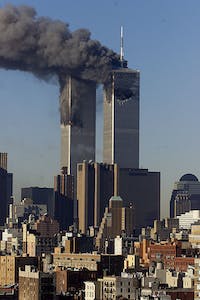 I couldn’t believe it. My brain was still calling it some freak accident. Getting in the car, I head to my parent’s house and watch in horror with the rest of the world as the second plane strikes the South Tower, and the President declares it an act of terror.

While I wasn’t at the Museum in 2001, Museum education director, Bob Lettenberger, recalls a similar experience. He’d just arrived at the Museum when a co-worker mentioned the North Tower was hit, and like many, the first thought was one of it being an accident. Turning on televisions throughout the Museum, staff watched as the second plane crashed into the South Tower.

Forty-five miles apart—Bob in Green Bay, Wisconsin, me in Oshkosh, Wisconsin— watched along with the rest of the country, as NYPD and NYFD arrive on the scene and perform heroic acts to rescue survivors, we watched as everyday people came together to help each other reach safety.

We stay tuned in as we watched at 9:59 a.m. as the South Tower falls. Again, 29 minutes later, when North Tower collapsed, the people of lower Manhattan evacuate the area, including commuters, residents, and tourists.

The chaos caused on September 11, 2001, wasn’t only felt on the surface, but underneath New York City in its subway system.

While the tracks and stations directly under the World Trade Center were closed within minutes of the first attack, all remaining subway service was suspended at 10:20 a.m. With power loss to trains and signals, millions of commuters made their way back to the surface through the subway tunnels. By 2:30 p.m., the New York City subway system was back in operation.

It would be the trains under Lower Manhattan, which sustained the most damage. The IRT Broadway-Seventh Avenue Line was right below ground zero. The tunnel section, including the Cortland Street Station, was destroyed and would need significant rebuilding to reopen.

In addition to the damage done to the IRT Broadway-Seventh Avenue Line, there was extensive flooding on the south line of 34th Street-Penn Station. It wouldn’t be until September 17, 2001, that express service would start running between Van Cortland Park-242 Street and 14th Street. And a few days later, on September 19, 2001, the 1 train would resume local service in Manhattan. 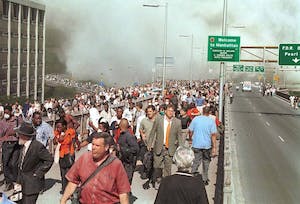 The subway system is a vital part of New York City. Millions of residents and commuters rely on it to get them to work and back home. On September 11, 2001, as New Yorkers were dealing with the emotional aftermath of their city being the epicenter of a terrorist attack, we saw a city come together, strangers comforting one another, ordinary people becoming heroes to help another person. And together, those who needed it would find a ‘friend’ to join them as they made their way en masse from the subway station to cross the bridges in to Brooklyn or Queens to make their way to bus stations and eventually home to hug their loved ones tight.