The Epitome of Grace

The Harvey Girls came first, followed by the Zephyrette’s. These female pioneers in customer service on the railroads. They were the epitome of grace.

When the United States focused on westward expansion, the Transcontinental Railroad completion would connect the coasts, and one businessman focused on travelers’ comforts. Fred Harvey opened a series of diners he called Harvey Houses.

In the beginning, train travel was dismal. There were passenger cars, but no dining cars. Long trips no decent food to dine on; most of the passengers’ options were found at a local roadhouse. But Fred Harvey and his Harvey Houses were about to change all that. Offering not only quality food, but he also gave passengers and diners a taste of refinement with their meals in the form of the Harvey Girls.

These women, these pioneers of the West in neatly pressed white aprons and black dresses, served food to weary travelers throughout the Southwest and West. 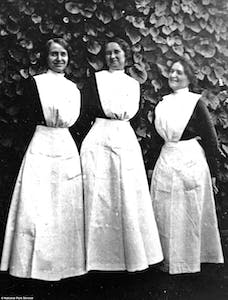 To become one of the 100,000 Harvey Girls was a boon for many young women of the time. Those who made the cut received a fair wage, status, and adventure. Thousands of women reached for the opportunity for a chance at independence. It provided them another path other than marriage and raising children.

The qualifications to even apply were strict. Applicants must be between 18 and 30 years old, of good moral character, attractive and intelligent, having at least completed an eighth-grade education.

Those women lucky enough to score an interview and then hired would have to pledge, swearing that they were of high exemplary character. Those who agreed they went on to a six-week training etiquette training program before they were sent to the Harvey House they would be working in.

Earning $17.50 a month, Harvey Girls would work 12- hour shifts and given free room and board in a dormitory provided by the company. Also present at each of these dormitories was a dorm mother who watched over the girls, ensuring they stayed in ‘high moral character’ and in perfect reputation.

As passenger-train travel improved over time, the starchly pressed Harvey Girls would make way to another female pioneer in railroad customer service, the Zephyrette.

These ladies were the epitome of the word hostesses. You could find them working on the California Zephyr, a train operated by three railroads: Chicago, Burlington and Quincy Railroad, the Denver and Rio Grande Western Railroad, and the Western Pacific Railroad. Requirements to become one of the women in the blue suits were strict.

It was the job of the Zephryette to greet passengers, make public announcements, send telegrams and handle mail delivery, serve as a tour guide, as a baby sitter, set dinner reservations aboard the dining car, game attendants, and provide general customer service, handling passenger complaints and requests. 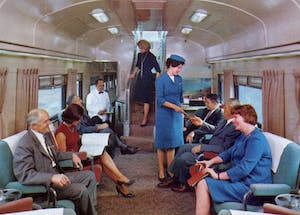 To even be considered, applicants needed to be between the ages of 24 and 28 years old, stand between five feet four inches and five feet eight inches tall and be of good character with a pleasing personality. Education was also a must. Zephyrette’s also needed to have the same education level as a registered nurse or hold a college degree.

Their uniforms were perfection. With a blue two-piece suit and CZ monogrammed white blouse, the look was topped off with a Zephyr pin, a military cap, and a topcoat.

For those ladies lucky enough to wear one, they too had to conduct themselves in a reputable fashion. Conduct for a Zephyrette was based on dignity and poise. They weren’t allowed to smoke or drink while in uniform, mingle with passengers when drinking, and weren’t allowed to accept tips; however, they could receive a card or gift.

Whether it was the 1800s or the 1950s, the ladies who worked as Harvey Girls or Zephyrettes were polished, poised, and dressed in a uniform that would make them stand out.