The Love of Toy Trains

Three youngsters stumble and tumble down the stairs. Their physical missteps are not from sleepiness or half-closed eyes. No, they are wide-awake with excitement and anticipation. It is their exuberant energy that carries them over the stairs, one nearly vaulting the next. It is Christmas morning, and Santa’s reindeer could be heard on the roof during the night.

As the three reach the bottom of the stairs and peer into the living room, they could not believe their eyes. Among the packages, encircling the Christmas tree, the silver rails of an electric toy train could be seen. Then, as if on cue, from behind the tree, emerged a shiny, colorful steam locomotive pulling a passenger train of perfectly matched cars. Little puffs of smoke chuffed from the locomotive’s stack as it whisked its holiday passengers around the decorated evergreen.

Toy trains have been a fixture of American child and adult entertainment since the 1890s. Beyond the thrill of operating such colorful miniatures, toy trains reflect the social and economic trends in society. They have been swept up by collectors, manipulated in advertising, fought over in court, and even shunned during a time of world conflict. Yet, in their purest form, toy trains continue to inspire young engineers to dreams of taking the throttle aboard a real locomotive.

Early toy trains were generally designed to be pushed along by hand or pulled on a cord. The track was not necessary to operate these trains. Many toy trains between the 1820s and 1890s were just a locomotive or the engine with a couple of cars in tow.

The Toy Train Set
The German toy manufacturer Marklin revolutionized toy trains in1891. Eugene Marklin and his partner Emil Fritz planned to grow their company into the world’s largest toy creator. Their product line included toy trains. By the 1890s, Marklin had discovered the strongly cyclical nature of the toy business. Yes, over a century ago, the Christmas rush already existed. To smooth the sales peaks and valleys, they introduced the toy train set.

Marklin’s first train set featured a wind-up locomotive with cars that traveled around an expandable track. The “starter” set made a nice Christmas present – bought during an annual sales peak. Then throughout the year, other gifts could include additional cars, buildings, or more tracks, all Marklin manufacture. Company advertising encouraged building larger miniature railroad empires with purchases throughout the year. It was win-win – more trains for youngsters and more sales for Marklin.

The German-made train sets were popular on both sides of the Atlantic, as Marklin became a major U.S. toy importer. Marklin’s U.S. popularity lasted until World War I. Just like their success, the hardship of war hit both at home and abroad. Anti-German sentiment virtually closed Marklin’s American market. In their homeland, most of Marklin’s employees were called to military service. The majority of these did not return from battle.

Made in America
While WWI proved the undoing of Marklin in the American market, competition in the United States began building in 1900. 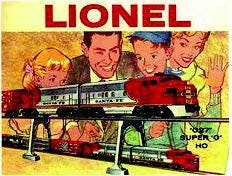 “Inventor,” Joshua Lionel Cowen is credited with developing the electric fan in the late 1880s. However, he came up with the cooling device just as New York was moving from summer to fall. The fan market cooled off. On a walk-in lower Manhattan, Cowen saw in a storefront a toy display featuring toy trains. They were just sitting there, lifeless. The inventor in Cowen took over as he envisioned a train, battery-operated, moving on a circular track that would allow it to run unattended in the store’s window, the motion of the train attracting potential customers.

The motor from the electric fan was fitted to a gondola car and labeled the Electric Express. Two steel strips were slid into slots in metal ties forming tracks. The gauge, or distance between the rails, of the first Lionel train, was 2 7/8 inches. Cowen took on an old friend, Harry C. Grant, as a business partner, and the Lionel Manufacturing Company was up and running. Their first electric train customer: Mr. Ingersoll, the man whose store window display inspired Cowen in the first place.

Just Like the Real Thing
Lionel toy trains took off like an express. The next 15 years saw the factory move and expand numerous times. And, just like the country, Lionel trains enjoyed the wild, heady times of the roaring 1920s. During this period, Cowen grew his train lines and began offering detailed metal structures. Among the most popular of these was a massive model of New York’s Hell Gate Bridge. Realism was one selling point for Lionel’s model trains. Ads for the trains typically included drawings or photographs of the toy trains from a low-level perspective, emphasizing the realism of the small trains. A related technique was to show a boy with his train, but the train image might extend around the ad’s text so that the locomotive – light burning and smoke-spewing – became visually separated. In this way, the ad was able to show both the boy playing with his toy and the happy boy’s imagination. Often Lionel’s illustrations of their toy trains followed the same format as the illustrations that railroads used to advertise real trains during the same time.

Fathers and Sons
Lionel advertised its trains both to boys and to their fathers. A 1946 full-page magazine ad plays on the boy’s shoulder – both looking down at the realistic toy train – and the large-type heading that reads, “for my son.” The same ad plays on the father’s wish to relive his youth by continuing, “The gift that makes me a boy again.” A 1950s Christmas advertisement shows a father bonding with his son and promising that a gift of a Lionel train set will make him the happiest boy in the world

What About Daughters?
Boys and their dads remained the primary market for Lionel trains, but that does not mean that Lionel did not want the female market. Feminist Gloria Steinem once poked fun at Lionel for their gender-slanted advertising, “It turns out that Lionel executives have been concerned about little girls. They made a pink train and were surprised when it didn’t sell.” Finally, due to consumer pressure, Lionel placed a photograph of a boy and a girl on some of their boxes.

They feared that if trains were associated with girls, they would be devalued in the minds of boys. In fact, many of Lionel’s catalog covers from the 1950s and 1960sdid feature girls as well as boys and sometimes moms as well as dads.

Ives Manufacturing
Before Lionel got its start and challenging Marklin’s world’s largest goal, Ives Manufacturing Company produced toys between1869 and 1932. Although Ives never became “world’s largest” they did hold the title of America’s biggest toy train maker from 1910 to 1924 when Lionel overtook them. Like other companies, the Ives line did not initially include electric toy trains. Ives began with paper dolls, then introduced a toy cannon that shot using real gunpowder; and moved to wind-up, clockwork dolls, and animals. Before 1900, cast metal toy trains appeared in the product line and were powered by wind-up devices. In 1900, a fire destroyed the Ives plant in Plymouth, Connecticut. Al l of the company’s tooling was lost. Edward Ives, the company founder, forged ahead constructing a new factory with state-of-the-art tooling and introduced a new, more detailed line of toy trains in 1901. At the time, Ives train products were far superior to those of burgeoning Lionel.

For the next two decades, Ives and Lionel would battle head-to-head for superiority in the toy train market.  Both Ives and Cowen were marketing and promotional innovators. Ives began directing his advertising directly at 12-year-old boys. He also created the fictional Ives Railway Lines, telling young men that they could grow their own toy railroad business with shrewd management ad acquisition of additional Ives locomotives, cars, and track.

Lionel challenged the quality of Ives products claiming they were inferior, would not last as long, and therefore be less fun for children to play with. In one advertisement, Lionel accused Ives of selling “flimsy” train cars. Another showed an Ives locomotive shattering into 15 pieces when dropped off a table. A Lionel locomotive dropped from the same table only sustained minor dents. It was found that in the ads, Lionel would compare its top-of-the-line product with the Ives economy line.

Both companies had their strong points. Depending on how one compared the various products, sometimes Ives was better; other times, Lionel won out. Beginning in 1915, Harry Ives and Joshua Cowen traded lawsuits for nearly a decade. In the end, however, Lionel won out with pricing that was generally lower than Ives and promotions that were much more convincing.

Early in 1928, Ives went bankrupt. On July 31, 1928, Lionel and another competitor, American Flyer, jointly purchased the floundering company for only $73,250. Only the toy train product line was kept, beginning an interesting, albeit brief period, in which designs from all three companies were incorporated into train sets.

Social Barometer
Toy trains have fascinated children and adults since the Civil War. That fascination, however, has ebbed and flowed over the decades; and, in many instances, matches the popularity of “real” railroads.

As we have seen, in the 1890s and early decades of the 20th century, toy trains were extremely popular. This period also witnessed the most intense railroad construction in our nation’s history. Dreams of being a big-time railroad engineer ran wild in the minds of young men, and the toy train manufacturers capitalized on them to sell their products.

Interest in toy trains may not have waned during the Great Depression, but the ability to purchase them most certainly did. Although the country did well economically during World War II, toy train makers found their revenues coming from government contracts for military goods and not pockets of young men wishing to expand their railroad empires.

After WWII, toy trains, just like their full-size counterparts, fell from popularity. The airplane, automobile, and Interstate highway drew traffic from the passenger and freight train alike. Now those same youngsters who had been encouraged to manage their railways were looking to new toys with rubber tires and wings.

As with everything, what goes around comes around. Today, railroads move nearly 40 percent of all U.S. freight, and Amtrak carries over 32 million passengers annually. Trains are more popular than ever and coincidentally, so are toy trains. The toy train field has expanded into model trains and accurate reproductions of real railroad equipment. Currently, hundreds of manufacturers provide products for all skill and interest levels when it comes to railroad hobbies.

For over 180 years, trains – both toy and real – have been woven into our American culture. Their popularity has come and gone and come back again. Toy train technology began as simple cast iron, pull-along. Today toy and model trains feature details befitting the computer age. Through it all, we are still fascinated by their color, motion, and mostly, the beautiful places they transport us to. All aboard!