Throughout the early days of railroading, there were many accidents and derailments and let’s face it, more than a few people died because of a train. In fact, by 1893, there were more than 400 railway accidents a year in the United States alone! So, what made a particular accident special and recognized above all the rest? A song was written about it. Not just any song. A song that became one of the earliest on record and one of the first to achieve platinum success: selling over one million copies! That song and the train wreck it was based on was none other than “The Wreck of the Old 97.” 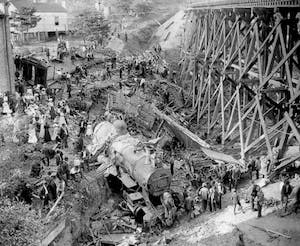 The Wreck of Old 97 occurred when the engineer, 33-year-old Joseph A. (“Steve”) Broady, at the controls of Southern Railway No. 1102 or the Fast Mail, was operating the train at high speed to stay on schedule and arrive at Spencer on time. The Fast Mail had a reputation for never being late.

At Monroe, Broady was instructed to get the Fast Mail to Spencer, 166 miles distant, on time. The scheduled running time from Monroe to Spencer was four hours, fifteen minutes – an average speed of approximately 39 mph. To make up the one-hour delay, the train’s average speed would have to be at least 51 mph. Broady was ordered to maintain speed through Franklin Junction.

The route between Monroe and Spencer ran through rolling terrain, and there were numerous danger points due to the combination of grades and tight radius curves. Signs were posted to warn engineers to watch their speed. However, in his quest to stay on time, Broady rapidly descended a heavy grade that ended at the 45-foot-high Stillhouse trestle, which spanned Stillhouse Branch. He was unable to sufficiently reduce speed as he approached the curve leading into the trestle, causing the entire train to derail and plunge into the ravine below. The flames that erupted afterward consumed the splintered debris of the wooden cars, and it was extremely difficult for the local fire department to extinguish the blaze. The investigation that followed was greatly hampered by the fire and the few witnesses to the incident.

Of the eleven men who died, nine were immediately killed, and seven were injured. Among the deceased was the conductor Blair, engineer Broady, and flagman Moody. The bodies of both firemen were recovered, but they were mangled so badly they were unrecognizable.

The day after the wreck, vice-president Finley made a speech in which he said: “The train consisted of two postal cars, one express and one baggage car for the storage of mail … Eyewitnesses said the train was approaching the trestle at speeds of 30mph to 35 mph. The Southern Railway placed blame for the wreck on Broady, disavowing that he had been ordered to run as fast as possible to maintain the schedule. The railroad also claimed he descended the grade leading to the trestle at a speed of more than 70 mph. Several eyewitnesses to the wreck, however, stated that the speed was probably around 50 mph. Likely, the railroad was at least partially to blame, as it had a lucrative contract with the U.S. Post Office to haul the mail, and the contract included a penalty clause for each minute the train was late into Spencer. It is probably safe to conclude that the engineers piloting the Fast Mail were always under pressure to stay on time so that the railroad would not be penalized for late mail delivery.

The disaster served as inspiration for songwriters, the most famous being the ballad first recorded commercially by Virginia musicians G.B. Grayson and Henry Whitter in 1923. Vernon Dalhart’s version was released in 1924 (Victor Record no. 19427), sometimes cited as the first million-selling country music release in the American record industry. Since then, “Wreck of the Old 97” has been recorded by numerous artists.

The ballad was sung to the tune of “The Ship That Never Returned” written by Henry Clay Work in 1865. Originally, the lyrics were attributed to Fred Jackson Lewey and co-author Charles Weston Noell. Lewey claimed to have written the song the day after the accident, in which his cousin Albion Clapp was one of the two firemen killed. Lewey worked in a cotton mill that was at the base of the trestle and claimed to be on the scene of the accident pulling the victims from the wreckage. Musician Henry Whitter subsequently polished the original, altering the lyrics, resulting in the version performed by Dalhart.

In 1927 it was claimed that the author of “Wreck of the Old 97” was local resident David Graves George, who was one of the first on the scene. George was a brakeman and telegraph operator who also happened to be a singer. Witnessing the tragedy inspired him to write the ballad. After the 1924 recording by the Victor Talking Machine Co. was released, George filed a claim for ownership. On March 11, 1933, Judge John Boyd proclaimed that George was the author of the ballad. Victor Talking Machine Company was forced to pay David $65,000 of the profits from about five million records sold. Victor appealed three times. The first two times, the courts ruled in favor of George. The third time the court of appeals ruled in favor of Victor Talking Machines. George appealed to the Supreme Court, but the court ruled that George had filed his appeal too late and dismissed it, thereby granting Victor ownership of the ballad.

So, thus a railroad accident became the subject of one of the oldest music copyright disputes in American history and opening the door for many train-related songs that persist to this very day.