This Week in Railroad History – The Brotherhood of Locomotive Engineers

November 6th, 1855: On this date in railroad history, 68 engineers from 13 states representing 45 railroads met in Baltimore, Maryland to organize the National Protective Association of the Brotherhood of Locomotive Engineers of the United States, say that three times fast, forming the nation’s first railroad union.

In 1863 it became known as the Brotherhood of the Footboard, and a year later, it was given its permanent name, the Brotherhood of Locomotive Engineers. The brotherhood was formed to negotiate pay for its workers and as an insurance protection plan for themselves and their families. Back in the 19th-century, most employers offered few, if any, benefits. Railroading was a tough job, and there could be many injuries and even deaths, so the families of those maimed or killed would need to be taken care of, and the brotherhood was looking out for them. The idea was that all the workers were brothers and should look out for one another, and in time, their families’ health and welfare if a member should pass away. 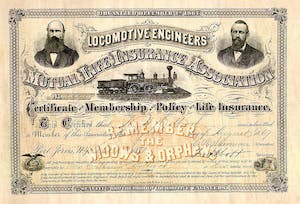 During the late 19th century and early 20th century, these unions participated in many strikes for equality, pay, and safety. At first, they were not very successful, but as the 20th century moved on, these unions won more rights for their members, and safer conditions and better pay became guaranteed. (For additional information, see the feature article in the winter copy of Rail Lines coming soon.)

Many of these unions are still around today. In fact, the Brotherhood of Locomotive Engineers and Trainmen has over 52,000 members today. Many of the other unions were alma gated into the United Transportation Union in 1969 to form a stronger union, given the decline or obsolescence of specific jobs, i.e. there was no need to have a fireman aboard a diesel locomotive.

Even today, railroad unions are going strong. They still have the same mission, to protect their members and fight for their rights as skilled workers. The railroaders of the future will need to be even more skilled and will require a strong union to represent them as we move forward in the world, looking forward to progress and looking back at the heritage and the hard work of all those that came before them.