Tracks Around the Tree

Many of us have seen the familiar sight of the toy train around the Christmas tree, most often making its way about its infinite oval, sometimes passing a few buildings and observers along the way. A few of the outstanding ones had real smoke coming from the stack and the familiar “whoo-whoo” that would ward off any house cat from messing with the ornaments on the tree.

But, what do trains have to do with Christmas? For generations, toy trains have filled the Christmas lists of children of all ages. Most of us know that regular-sized trains first appeared in the early 19th century. Since most children were more familiar with trains than automobiles, toy train sets were popular requests for Christmas gifts. Upon opening a toy train set, assembling it to run under the Christmas tree was a natural thing to do. For many Americans, toy trains also evoked sentimental feelings similar to the other emotions associated with Christmas. Christmas was a time when many people traveled long distances to reach home or to see relatives. Soldiers were coming home on leave; grandparents were coming from out of town. Most of these journeys would involve a train ride. Likewise, the nation’s railroads were a primary means of transporting packages around the country at Christmas time.

The first working model trains were not necessarily “Christmas” trains or even toys. They were steam-powered models that required a certain amount of skill and patience to operate safely. Sometimes these came into the home at Christmas, but even if you had a circle of track for it, you wouldn’t want to run a locomotive burning real fuel underneath a real cut tree. 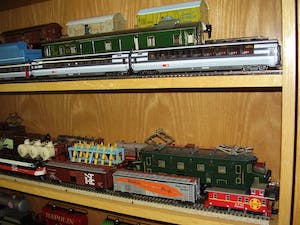 The modern train set came into being at the dawn of the 20th century. At the time, trains were the main form of overland transportation, and their popularity had yet to be challenged by airplanes or cars. Most historians credit German toymaker Eugen Marklin, with inventing and marketing the first true, but non-electrical, train set in 1891. These early trains were so influential that many modern international standards and gauges for toy trains originate from the Marklin Company’s tracks.

Soon after these first sets hit the market and gained popularity, other inventors entered the arena. The first electric toy train was sold in 1896 by the American company Carlisle & Finch. It was powered by a 2-pole 10-volt electric motor and traveled on a 3-foot circle of track. But it was Lionel trains that would change the landscape of toy or scale model trains.

In 1901, Lionel showed New York City families that it was possible to fit an electric motor into a toy locomotive and power it by low-voltage electric current. A new industry and a new hobby were born. 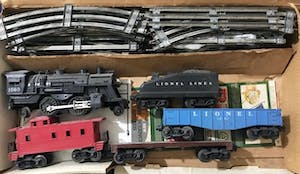 The first electric trains were large by today’s standards. Most of them were about the size of today’s garden trains. You couldn’t use them outside, though. They were tin-plated steel that would eventually rust under the driest conditions.

These “Standard Gauge” trains ran on a track with the rails about 2″ apart. Cars seven inches high, five inches wide, and 16″ long were common, although some of the cheaper sets used smaller measurements. But not everyone had room for such a large train. Toy trains were also expensive. Between 1901 and 1950, an electric model train was considered a significant purchase that needed to be budgeted.  But as manufacturing techniques improved and “economies of scale” grew, the cost for a good train set went from being about the same price of a small car to that of a refrigerator or other major appliance.

Even with its hefty price tag, trains became the quintessential Christmas present for many young children, especially post-World War II into the 1960s.

Between Thanksgiving and Christmas, elaborate toy railroads would appear in homes. Many of these in-home railroads started as an extension of the Christmas tree, while others expanded to take over spare rooms and back porches.  In Catholic homes, train sets would incorporate the Nativity, with other buildings and accessories added over time and not always scale.

In many East Coast cities, particularly around the nation’s capital, seasonal railroads called “train gardens” were being built. They had buildings, figurines, an abundance of accessories, and maybe even multiple trains running simultaneously. The train garden tradition became so popular that fire stations would leave their engines outside until after Christmas and set up community train gardens in their parking bays.

Year-after-year many families added to their toy train set-up. What might have started as a simple circular track around the tree with a few train cars would eventually become an elaborate layout with multiple tracks and buildings. Some families began constructing entire holiday villages under their Christmas trees soon after Thanksgiving.

Unfortunately, Standard Gauge trains were too big to leave sitting out indefinitely, so manufacturers looked to make smaller tracks. The most successful at the time was the “O” gauge, which has rails that are about 1.25″ apart. Over the same period, the trains began to look more and more like the real trains they were imitating. Soon the hobby of “model railroading” was born. Train fans began building permanent railroads that looked and operated like a real railroad.

After a while, it wasn’t enough to have a single train running around the Christmas tree once a year. Rather, hobbyists might own several trains and have a permanent railroad set up on a custom-built table year-round. For decades Lionel held the lion’s share of the model railroad market, with American Flyer coming in a distant second. But both brands were still large enough to look good around the tree.

Even at half the Standard Gauge trains’ size, O-scale trains were too large to fit into most homes without compromises. To meet the new demand for a smaller size model train, Lionel and other companies started making their equipment about three quarters the size it ought to be. Eventually, American Flyer would also adopt the narrower track, and the S-scale model railroads were born.

With the rise of modern technology and electronic gadgets filling Christmas lists, toy trains under the Christmas tree became less common over the years. However, some experts have seen a renewed interest in the toy train tradition within the past decade, attributing this resurgence to the popularity of modern entertainment that features trains prominently.

Whether you are an avid model-railroader or bring a train out for the holiday season, model trains running around Christmas trees bring back memories of simpler times. Christmas trains are to the soul what “comfort food” is to the appetite, a kind of reassurance that there are still good things in the world. So, when you sit down and watch your children or grandchildren unwrap a train set and play around the Christmas tree, know that you are part of a long-held and proud tradition that keeps moving forward in our memories and our hearts.

For those of you who are just getting started, here is a table with typical model/toy train scales and gauges: