As the Second World War was drawing to a close, many American’s were longing to return to a time of prosperity and comfort; a time when restrictions were lifted, and they would have the freedom to move about the country. Many were dreaming of what life would be like after the war, mainly how they would get around the nation. The airline industry and highway systems were still in their infancy, as perceived by many, so naturally, most still looked to the railroad as the king of travel methods. However, to keep its crown, the industry needed to pull off some spectacular showmanship. 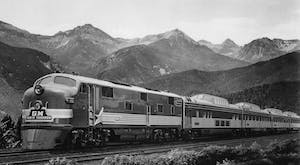 In steps Cyrus R. Osborn, a Vice President at General Motors and the General Manager of its Electro-Motive Division, the company’s railroad interests. Osborn had spent the war years overseeing the production of General Motors diesel locomotives, one of the few companies to be granted a waiver on diesel manufacturing as they were reliable and had could be used substantially for the war effort. Riding in the cab of an EMD diesel or even in the cupola of a caboose, he was given a wide field of view and realized that passengers in postwar America would substantially enjoy the scenery such a setup would have. At the time, there was no such thing as a dome car. The plans were now in the making to become a reality.

At the time GM was not in the car building industry, they built locomotives. However, many of the cars were equipped with General Motors or GM affiliated components. In early 1945 a scale model was developed and attracted much attention. As the year drew to close, many restrictions were lifted, and the material became available to make this model a reality.

In November of 1945, GM contracted with Pullman-Standard for the construction of four dome passenger cars, with GM designers providing the interior designs. GM produced one of their E7A locomotives and styled it similarly to the cars, with construction being completed on May 17th, 1947. Two weeks later, the Blue Lady, as it was dubbed, was ready to hit the road. 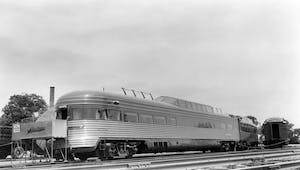 The Moonglow lounge-observation car was one of four dome cars on the GM Train of Tomorrow. The other three dome cars were the Star Dust chair car, the Sky View dining car, and the Dream Cloud sleeper car.

For the next 29 months, the train crisscrossed the United States and southern Canada. It visited big towns and small towns, GM plants, and those of their suppliers. Dozens of luncheons and excursions were held for railroad executives, GM executives, GM dealers, and their guests. Nearly 6 million people walked through the train as it toured, though a much smaller group got to take a ride. The train stopped in 181 cities and towns along the way. Following its 65,000 mile tour, the train went right into service with the Union Pacific Railroad at the City of Portland. Many of the cars were operated until the mid-1960s when they were withdrawn from service, and a majority of them were scrapped. One of them, the Moon Glow, was rescued from the junk heap by the National Railway Historical Society and is undergoing restoration.

The Train of Tomorrow became a great marketing tool for General Motors. Before it even hit the rails, 49 dome cars had been ordered from various railroads, and its success helped EMD to dominate the locomotive industry for over 30 years. The Train of Tomorrow would become more of a success than another design idea by GM a decade later, the Aerotrain, which was marketed as a low-cost way to compete with the airplane and the new highway system, which was being dominated, ironically enough, by another one of GM’s products, the automobile.