Many doubted that the rail line would ever see completion. Not that it mattered—as both the Union Pacific and the Central Pacific Railroads were on the rail line to make it happen.

An engineering feat like no other, by the time the Golden Spike was driven in, the Union Pacific and Central Pacific Railroads, and the people involved, were becoming legends in history. They
were also extremely broke. 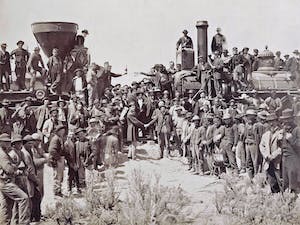 Running on Steam
With the Railroad Act of 1862, the Union Pacific and Central Pacific Railroads were under an ongoing obligation with the U.S. government to operate telegraphs, transport supplies and mail, and transport military personnel and government officials.

On the day, the railroad connecting the country was celebrating its official completion, owners were left in a bind. Completion of the Transcontinental Railroad, an engineering feat in the 1800s, was fraught with challenges. Along with the personal pilfering of funds by the owners of both railroads, both companies still needed cash to conduct daily business.

Cash reserves were depleted, employees were not paid, bills with contractors were past due, and loans were either at risk or heading for default. Union Pacific and Central Pacific needed a way to become financially solvent fast if they wanted to stay operational.

To operate, the Transcontinental Railroad needed a few important things to happen.

This was a bit of a “Catch-22” as the entire process was interdependent. However, there was one ray of hope that could bring it all together and would keep the railroads solvent. It would provide employees, farmers to work the land, businesses to serve the population-all of it creating an in pouring of much needed funds.

As part of the Railroad Acts in 1862 and 1864, both the Union Pacific and the Central Pacific Railroads were given land grants within 20 miles of each side of the right-of-way. This was land that they could sell or rent.

With the route going through some of the harshest prairie land and still heavily populated by Native Americans, it was going to be a tough sell to people on the east coast. The railroads needed to convince them that even though the land was undeveloped, it was fertile. They needed to paint a rosy picture and capitalize on the excitement that followed building the Transcontinental Railroad. The only problem was, not everyone was buying it.

Bringing the Masses to Them
Armed with pamphlets and stories about the grandeur of living life on the prairies in the territories of Nebraska, Wyoming, and Utah, representatives of the railroads went east. Armed with attractive packages for sale, their goal was to recruit families to uproot their lives and travel to an unknown territory to work the land and/ or operate their businesses. Heavily advertised in print and through sales offices in key areas, the eloquent prose was not enough to build the numbers that the Central Pacific and Union Pacific would need to make it work. They broadened their search area and railroad representatives set up offices in Europe.

For many in Eastern Europe, the young United States was the answer. It was the land of opportunity, allowing them to be free of tyranny and build their own fortunes. The railroad representatives, whether it was a conscious decision or a stroke of luck, traveled to regions that were also similar in climate and topography, and soil to that of Nebraska, Wyoming, and Utah. This would increase their chances to be successful.

After making the arduous journey to Ellis Island, where settlers were processed and documented, the families were met by a railroad official who whisked them towards the final leg of their journey—a series of immigrant trains which would move them to their final destination. Once there, the land could either be purchased or rented, both of course were paid to the railroads. The new settlers would also order supplies like grain and seed, building materials, farming implements, and livestock. All of it shipped on the railroads.

When the first planting season was over, if all went well, those farmers would then supply the merchants in the nearest towns with goods to sell. Again, paying the railroads to ship any surplus to other markets. And thus, a continuous flow of business that would attract others to an area to build, open their hotels, stores, and companies.

But it was not like that for everyone. Many of the settlers worked for the railroads whey they could not farm. Immigrants would work in the railroad shops during the winter months. During the growing season, the same workers would take their families and move their farm, working crops for the season. This was especially true in Nebraska. In Lincoln, they state capital, Burlington hired immigrants for shop work and would provide transportation to and from the sugar beet fields in western Nebraska during the growing season.

It was a trade that kept settlers from defaulting on their loans and rents to the railroads while providing income for their families. It also provided the railroad with labor they could pay at reduced rates.

A Whole New World
The changes to the American infrastructure due to the Transcontinental Railroad, and the changes made to the Union Pacific and Central Pacific Railroads, cemented their place in history forever. Connecting the east and west coasts opened an entirely new world, one that would shape the nation for many years to come. The economic impact was substantial. It opened the ability to ship goods from all over the world, as well as those from one coast to the other. It brought new conveniences to the masses.

By the 1890s, the United States was well on its way to becoming an urban populated nation. The Transcontinental Railroad supplied cities and towns with food, fuel, building materials, and access to markets they did not have access to before. In the first ten years after the Transcontinental Railroad opened, there was an estimated $50 million in freight that was transported coast-to-coast, aiding into a vast increase in production, creation of new business, and substantial economic growth that benefited many.