It was the end of the largest war America had ever seen, and many service members were returning home. America’s industry was at its zenith, and Americans were about to enter into a new golden age after nearly two decades of economic depression and war. The railroad played a prominent role in supplying the troops and keeping America’s economy rolling, literally. The railroad had become the most efficient globally, and the nation’s economy was second to none. Now it was time to build upon these improvements in a peacetime atmosphere.

With the easing of wartime restrictions, many Americans were on the move for the first time in a long time. They were either moving to cities, and this new thing called the suburbs or taking that long put off a family vacation that they either could not afford before or due to the war had limited ability to do so. As service members returned home, having traveled around and seen the world, wished to travel and see more of their own country. Many people wanted to see our nation’s sights, particularly out west, which was having a population explosion post-war. The railroads were there to capitalize upon this and help potential patrons as much as possible. 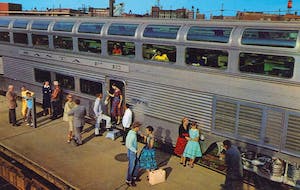 around. The 1930s had brought about the age of the streamliner, but something fresh would be needed to attract patrons with comfort and the ability to see the wonders on their trip as they traveled along the rails. Many were no longer content to see the nation in a magazine, read about it in a book, or hear its sounds on the radio, they wanted to see it up close. The railroads thought hard and came up with the perfect vehicle to allow their passengers to see this great nation, the dome car. According to author John White, Jr. in his book, “The American Railroad Passenger Car (Part 1),” the dome car was the most successful postwar attempt to save the passenger train.” Despite its extreme weight and expense, it went on to see service on many railroads.

A portion of a dome car, usually in the center of the car but offset towards one end, is split between two levels. The offset results in floor plans with a “long end” and a “short end” on the main level. Stairs then go up to the dome and down to the lower level, with the lower level below the dome, usually offering restrooms or a small lounge area. Simultaneously, the upper portion is usually coach or lounge seating within a “bubble” of glass on the car’s roof. Passengers in the upper part of the dome can see in all directions from a vantage point above the train’s roofline.

Dome cars have their earliest beginnings dating back to the late 19th century. The Chicago, Burlington, and Quincy Railroad had what was known as a “birdcage” car as early as 1882, and in 1891, T. J. McBride received a patent for a car design he dubbed an “observation sleeper.” This car was illustrated in the technology journal Scientific American as having three observation domes on a single car. The Canadian Pacific Railway used tourist cars with raised glass sided viewing cupolas on their trains in the 1920s as passengers rode through the Canadian Rockies.

However, these early designs were not successful, and it was not until the streamliner era that the car indeed came of age. In the mid-1940s, Cyrus Osborn, vice president, and general manager of General Motors’ Electro-Motive Division conceived what he dubbed a Vista Dome car built from a Budd Company coach, which featured a second-floor solarium for an unprecedented 360-degree view of the surrounding landscape. In 1944, while traveling in an EMD-built Denver & Rio Grande Western locomotive through Glenwood Canyon in Colorado, he recognized the beautiful views the passengers could enjoy from a panoramic dome. This first Vista Dome was called, appropriately, Silver Dome. On July 23, 1945, the car was tested in the consist of the Twin Cities Zephyr.

Vista-Domes became a trademark on passenger trains of the Chicago, Burlington & Quincy, and particularly the California Zephyr, which used dome cars almost exclusively so that passengers could be afforded full views of their trip through the Rockies and Feather River Canyon. The California Zephyr was one of many trains to carry the Zephyr name of the Burlington Route. On its inaugural run in 1949, every woman on the train was given silver and orange orchids flown in from Hawaii, and passengers were taken care of by hostesses known as the Zephyrettes, railroads answer to the airline stewardess. By the summer of 1954, the scheduled run for the 2,532 miles from Chicago to San Francisco was 50 hours and 50 minutes, and on March 1, 1955, the first birth aboard the train was recorded when Reed Zars was born as the eastbound CZ went through Ruby Canyon on the Utah-Colorado border. 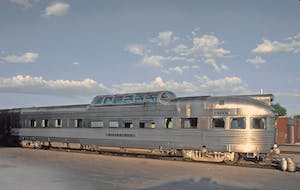 In the west, virtually every major railroad had its version of a dome. The Union Pacific operated Domeliners (in which they featured dining services among other things), the Milwaukee Road and Santa Fe Super Domes (the Santa Fe also operated Pleasure Dome lounges and the popular Hi-Level cars on its El Capitan with second-floor glass ceilings), the Great Northern Great Domes, and the Northern Pacific’s Vista-Domes. Many railroads tended to use the Budd Car Company’s Vista Dome and a few built by Pullman Standard Car and the American Car & Foundry.

All the cars were dome equipped, including coaches, dining cars, sleepers, and lounge observation cars. Most were double-decked, which cut down on revenue space (paying passengers) because most railroad executives knew people wouldn’t want to spend their entire trip in the domes, so the addition of stair space and air conditioning as well as needed seated on the lower level added to increased cost in an already stressed market field.

As noted earlier, many manufacturers got into the expensive business of making dome cars. In addition to Budd, Pullman Standard designed and built the cars used on GM’s Train of Tomorrow in 1947. These cars were used to exhibit passenger train technology to the masses between 1947 and 1949, visiting many places, including the Chicago Railroad Fairs of 1948 and 1949.

Pullman built the first ten full-length domes for the Milwaukee Road’s Chicago to Seattle Olympian Hiawatha. The Milwaukee Road paid $320,000 for each “Super Dome.” The dome cars operated that route until 1961 and then used solely for service between Chicago and the Twin Cities before being sold to Amtrak upon its inception in 1971. Like most Pullman domes, the Milwaukee domes were 15 ft 6 in tall rather than the Budd/ACF standard 15 ft 10 inches. 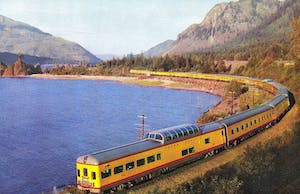 The Union Pacific had to assign a second steward to the upper dining area because service was so popular. After UP ended passenger service in 1971, it sold off or scrapped many of the Astra Domes. UP retained dome coach #7006 and dome lounge-observation #9004 for company use and donated dome diner #8003 to the National Railroad Museum, where it can be seen today.

Dome cars were mostly featured on passenger trains of the western railroads due to the expansive open vistas afforded and because height restrictions were not such an issue as they were back east, making dome cars in general relatively rare. However, railroads like the Baltimore & Ohio made use of them the best the could by reducing the height of the domes. The B&O’s version was dubbed the Strata-Dome, and the first such car to operate in the east debuted in 1949. It consisted of a pair of dome cars built by Pullman Standard and three Budd Company domes initially destined for the Chesapeake & Ohio Railway. In 1952, the B&O went so far as to add floodlights on the dome cars’ roofs to illuminate the scenery for passengers while traveling at night.

The most unique twist on a type of dome car and one of the most interesting was the Seaboard Air Line’s Sun Lounge equipped on its very popular Silver Meteor passenger train. Built-in conjunction with Pullman-Standard, the car was not actually a dome but featured a glass roof as dome cars could not navigate through the tunnels along the Potomac River and New York City.

Even before Amtrak took over most passenger traffic in 1971, dome cars began to fall out of favor. Maintenance costs were high, as well as operational costs. Air conditioning needed to be maintained, even during the winter months. Extra staff had to be employed because of the double decks. One of the costliest components to having a dome car was the limited amount of people each could carry to generate revenue. As stated earlier, most people wanted to be able to roam freely between the upstairs and downstairs areas, thereby cutting passenger load in half.

When Amtrak took over passenger service in 1971, it maintained a few of the dome cars in its early years, most notably the Auto Train. But as years passed and costs continued, dome cars fell out of favor. There were replace by the bi-liner coaches seen so often today on Amtrak trains.

A few private rail carriers still operate them in America, most notably American Orient Express, Holland America, Alaska Railroad, and a few in Canada, such as VIA Rail and Rocky Mountaineer Rail Tours. Many are also preserved in museums, such as the National Railroad Museum, allowing us to look upon a significant point in railroad history during a time when the best opportunity to see American was from the second-story window of a passenger train.