The Big Boy is by far Union Pacific Railroad’s most notorious steam locomotive. From its sheer size to the strength the engine boasts, it is a favorite engine for many railroad fans. However, the Union Pacific Challenger would pave the way as the ‘little’ brother for the famed steam engine.

Looking for new locomotives that could haul the payload over the mountain regions of Wahsatch Range in central Utah, and the tough demanding Sherman Hill’s area in Wyoming, Union Pacific, and other western railroads were looking for a steam engine that could handle the uneven and harsh terrain going west.

The Making of Giants to Tame the Mountains
During the early 20th Century, railroads made some engine design advancements to match the rough mountain terrain, but it still wasn’t enough. By the 1930s, freight traffic increased, and it left railroads using multiple steam engines or helpers. Union Pacific used a combination of steam locomotives with wheel configurations of 2-8-8-0 and 2-10-2 to get its trains over the Wahsatch mountains’ rugged grades.

For anyone new to steam locomotive classifications, the wheel configuration’s first number is the pilot or front wheels. The second number is the first set of driving wheels, and the third set of numbers are the trailing wheels under the cab. For example, in locomotives with a 2-10-2 configuration, there are 2 pilot wheels, 10 driving wheels, and 2 trailing wheels. Those steam engines with wheel configurations noting 4 numbers denote a second set of drive wheels. It’s also important to note that a locomotive’s frame is “articulated” or hinged to allow it to go through curves. When watching an approaching locomotive go through a curve, you can see the boiler swing out left or right independently of the lower half of the engine, as the rear half of the locomotive remains in a straight direction until its wheels and frame are halfway through the curve.

Coined the Bull Moose by Union Pacific, the locomotives boasting the 2-8-8-0 wheel configuration could easily handle pulling the weight of the freight loads; however, the speed was reduced to 12 mph when going through the mountains, causing bottlenecks in warehouses and depots.

To stay competitive and meet customers’ demands, the railroad would need to increase speed and reduce the rising costs of helpers or extra trains that could handle freight trains more efficiently, especially over the Wasatch mountain range’s stiff grades.

Tasked with designing a locomotive to meet these demands is Arthur H. Fetter, a general mechanical engineer with the railroad. He’d been with Union Pacific since 1918 and was responsible for the development of its 4-8-2 “Mountain” and 4-10-2 “Overland” locomotives.

Putting together a team, Fetter chose to utilize the long-standing working arrangement with the American Locomotive Company (ALCO). Partnering with ALCO engineers and Otto Jabelmann, assistant general superintendent for motive power at Union Pacific, the team worked to create what would become the Challenger.

The Older ‘Little’ Brother is Born 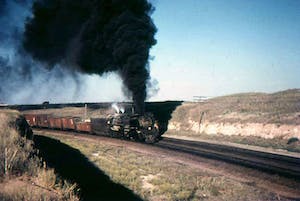 To meet the demands of hauling freight when going through the mountains, Fetter suggested a high-speed articulated locomotive to reduce the reciprocating weight of a compound and increase the 50 mph speed limit of the railroad’s most powerful locomotives, the rigid wheeled 4-12-2s.

Together the team decided that the leading four-wheel truck would be needed for better side control. The team also split the six sets of drivers into two groups of three and replaced the two 27″ outside cylinders and the one 31″ middle cylinder with four 22″ x 32″ cylinders. Two inches were added to the boiler diameter and raised the pressure from 220 psi to 255 psi. The firebox was enlarged, and they added a four-wheel trailing truck to carry its added weight.

The result was a 4-6-6-4 wheel configuration that could reach greater speeds and be a workhorse pulling freight through the mountains while meeting deadlines. On August 25, 1936, the prototype arrived in Council Bluffs, Iowa. The new locomotive, listed No. 3900, arrived pulling a refrigerator train. Originally called the 3900 Class, it would be a tongue in cheek response by executives to the shop workers who ‘changed’ the name of the Wahsatch to Big Boys.

During a 1936 meeting, J.W. Burnett, general superintendent of motive power and machinery, proposed a test run for the new locomotive. Brunette decided to operate the engine unassisted from Ogden, Utah to Wahsatch, Utah, run fast over to Green River, Wyoming before returning to Ogden with another train. Burnett proclaimed that it was a “challenge for any locomotive,” and executives agreed. William Jeffers, Union Pacific’s executive vice president, approved and declared the new engines called Challengers. After the meeting, Jeffers sent a memo to the advertising department in which he said he wanted the name “Challenger” used in all press releases about the new locomotive.

Sibling Rivalry
Throughout the mid-1930s to the early 1940s, the Challenger was used to transport freight through the mountains but would be replaced in favor of the larger and more powerful Big Boy. However, Union Pacific didn’t take the Challenger out of service. Union Pacific found uses for the locomotives all over its system from Oregon and California to Utah and Wyoming, covering many of the areas too small for the Big Boy to operate but too large for other locomotives.

Most of the 252 Challengers built came from ALCO. An additional 27 was added to the fleet by Baldwin Locomotive Works between 1936 and 1943. Though designed for Union Pacific, only 105 of the 252 built went to the company. The Challenger also became part of the Denver & Rio Grande, Northern Pacific, Spokane, Portland & Seattle, Western Maryland, the Western Pacific, and Great Northern railroads.

Today, only two of the 252 Challengers built remain preserved. Union Pacific No. 3985 and No. 3977 while eight of its ‘bigger’ brothers, the Big Boy, are preserved. Train fans can find the No. 3977 locomotive on display in North Platte, Nebraska.

While many celebrate the exploits and splendor of the Big Boy, let’s not forget about his ‘little’ brother, the Challenger. And while history remembers ‘big’ brother best, let’s look at the fact that ‘little’ brothers paved the way, and many of the trials run by the Challengers enabled the development of the Big Boys to be smooth and effective. Because of the Challengers’ design, trial, and errors, Big Boys were more effective at helping to move freight and win the war during America’s greatest conflict, World War II. Big brother may do it best, but little brother is always there to lend a coupler.