Stuck in the house and can’t travel anywhere? Wondering what the limitations are on seat availability when you can travel again? Sounds familiar, doesn’t it? While the cause for travel restrictions today is due to a pandemic, during the late 1930s to the mid-late 1940s it was caused by war.

During World War II, passenger train service was severely curtailed early on. As you can imagine, hundreds of thousands, even millions, of service members, along with wartime supplies were being transported about the United States. To better understand how the restrictions went into effect, let us look back at the Great Depression.

In 1920, ridership on railroads was at an all-time high. Before the beginning of the Great Depression, the railroads collectively racked up 43 billion passenger miles a year on average. While the car had become an adversary to the railroad, it wasn’t until the Depression hit that it would become more of a competitive threat. With the cost of tickets for a passenger train high, families either made do with their cars or found alternative transportation, e.g., walking, hitch-hiking or hoboing.

As the economy picked up between 1939 and 1941, many people began riding the rails again. The railroad companies had improved both cross country and urban travel, and many of the trains were very luxurious. They had to recoup the money lost early in the depression and pay for the trains themselves. Everything seemed to be picking up until the fall of 1939. 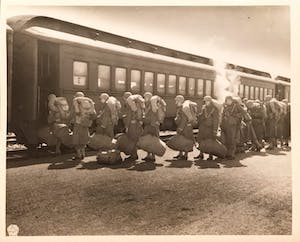 World War II began in September of 1939, and by the spring of 1941, it seemed inevitable that the United States would become embroiled in the worldwide conflict. The nation’s armed forces were being built up, and people were getting back to work, this time in the defense industries to help support the upcoming war. But how would that affect the railroads?

Railroad traffic increased as the armed forces rebuilt. A freight car shortage occurred in late 1939 for the first time since 1921, and the railroads worked steadily to put long-dormant cars and locomotives back in service. Determined to avoid the chaos that resulted from government seizure during World War I, an Office of Defense Transportation was created to exercise general control over the railroads and ensure that national transportation priorities were met.

Early on in the war, many people were discouraged from traveling long distances. A certain percentage of each railroad’s passenger fleet was devoted to carrying service members to their duty stations. Long-distance passenger travel relied on the railroads when the war began. After Pearl Harbor, seating and service priority went to men and women in the military and some civilians in war-related jobs. Others had to take what they could get.

Railroads carried about 43.7 million military personnel, or more than 97% of all troops moved between December 1941 and August 1945. At least 100,000 military personnel were on troop trains daily as railroads used a fourth of their coaches and half of all Pullman (sleeper cars) for troop transport. An average of more than 2,500 troop trains a month operated in the U. S.

A quarter of all passenger cars would be reserved for military personnel, and about half of all Pullman sleepers would be utilized by them as well.

However, by late 1943, the railroads’ efficiency was realized. It just made sense that the civil population use it as a primary source of transportation, especially those aiding the war effort. Combining civilian and military ridership, the year 1944 set a goal of over 85 billion passenger miles traveled on the railroads. That is twice the amount reached in 1918 (World War I), with 16,000 fewer cars than was in use in the previous war!

The end of World War II brought the gradual elimination of travel restrictions, but it took many months for the railroads to complete their wartime work and return to a peacetime footing. Millions of soldiers, sailors, airmen, and marines had to be processed through discharge centers and returned home in the months following V-J Day, the end of hostilities with Japan. And nearly every one of them traveling by train, Restrictions imposed in the closing months of the war, such as removing sleeping cars from runs of less than 450 miles, eased the problems of military travel but increased the burden faced by civilians. Many people would need to wait nearly half a year before the restriction was lifted, which occurred on March 15th, 1946.

The sheer necessity of the service provided by railroads meant that their wartime work wouldn’t be completed for months while competing modes of transportation could respond to peacetime civilian demands quickly. The greatest troop movement of the entire war occurred on August 3 through August 4, 1945, when soldiers returning from Europe departed from Camp Kilmer, New Jersey, to various destinations around the United States. More than 20,000 soldiers packed onto 31 trains, requiring 331 Pullmans, 100 coaches, and 41 kitchen cars. That same week, more than 250,000 servicemen and women were transported in organized troop movements requiring 726 Pullman cars and 512 coaches. The Army maintained its priority for Pullman cars well into 1946. By comparison, gas rationing ended quickly after the war, and even the airlines had gotten their planes back from the government by the end of 1945.

After railroads successfully won the war on the home front, there was a new battle to be fought: how to maintain ridership in the face of so many people buying automobiles and utilizing airlines to travel long distances. World War II may have been the heyday of the railroads, but they would keep fighting on for a few more decades to get their fair share of riders and patrons, many of whom to this day still love to ride the rails.

For more information, check out Trains to Victory: America’s Railroads in World War II by Donald J. Heimburger and John Kelly. It covers a great many topics and has a lot of fantastic photos as well. An excellent read for anyone interested in either railroads, World War II, or both!