Wide Open in the Fresh Air

From riding fast on your bike or going down the open road in a convertible, there is nothing better than a swift breeze on a hot summer day. Even train-cars got in on the action. Before the invention of air conditioning or where the technology might not be practical to install, the railroad’s open-air cars allowed for a refreshing alternative to a stuffy coach car on a hot summer day. 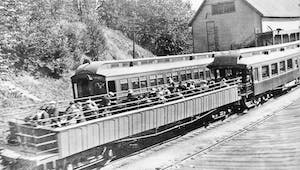 After the railroads conquered the American frontier in the late 19th century, many Americans began to travel the routes and explore the beauty that the nation had to offer, especially in the west. Observation cars were added to trains to allow passengers to get a better view of all the sights that traveling the vast distances between sparsely located areas. However, these cars only allowed a certain amount of sightline and were sometimes a little stuffy in warmer climates.

The invention of the open-air car occurred as the world rolled into the early 20th century. These cars allowed passengers to get a full 360-degree view of the world around them and let them enjoy the beauty of their surroundings. Many early open-air observation cars were cut down coaches or even gondolas modified with railings and seats for a mass of passengers. They proved to be very popular amongst tourists.

To provide shade and still allow for an all-around panoramic view of the scenery, many open-air observation cars were outfitted with a canopy. This is the case of our open-air car here at the National Railroad Museum. A converted flatcar from the Atchison, Topeka, and Santa Fe, the Cdr. Buerschinger has bench seating for 80 and is covered by an all-around canopy covering the entire 90 feet of the car. The Buerschinger was converted in the early 2000s by our shop crew, in the same aspect that many open-air cars were modified by their railroads.

However, there was a slight problem with the design of open-air cars, particularly in the age of steam. The smoke and ashes could sometimes cover the passengers and occasionally obstruct some beautiful scenery, making the open-air car pointless. The addition of canopies helped alleviate the ash fall, but not always. The Chicago, Milwaukee, St. Paul, and Pacific had the remedy. 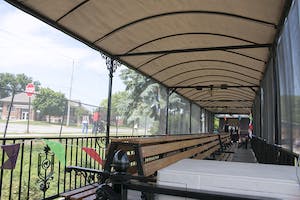 Building upon its vast electrified route in the west, the Milwaukee Road was one of the prime users of the open-air car. They were purpose-built by the railroad and featured an all-around view and a canopy that was unobstructed by smoke and steam, pleasing the patrons to the utmost extent. Many of the Milwaukee Roads open-air cars ran through the Glacier National Park in Montana, giving the passengers an exceptional scenic experience.

Open-air cars can still be found today on many scenic railways from coast to coast, from the mountains of West Virginia to the canyons of Arizona and everywhere in between, even right here at the National Railroad Museum in Green Bay, Wisconsin. Come ride on an open-air car; it’s well worth the view and breath of fresh air.