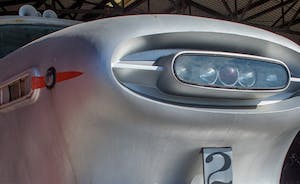 The Aerotrain’s goal was to lure the general public back to the rail and provide an inexpensive solution for railroads to provide a higher-speed public rail service.

In 1955, the railroads were trying to stem the dismal downward spiral they saw in passenger traffic. They were looking for a vehicle that was fast, economical to build and operate, and fashionable in appearance. 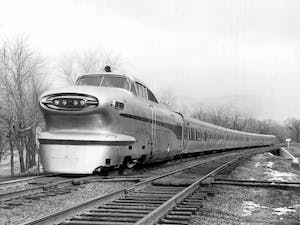 General Motors, using existing technology from its many divisions, developed the Aerotrain. With coaches fashioned from bus bodies and appliances by Frigidaire, the Aerotrain was designed to travel at over 100 mph.

However, with its rough ride and poorly designed locomotive, the prototypes were disliked by passengers and railroads alike. After testing on three railroads: the Pennsylvania, New York Central, and Union Pacific, the two trains were sold to the Rock Island, who used them in commuter service around Chicago. In this service, the Aerotrain was allowed to travel at only 60 mph.