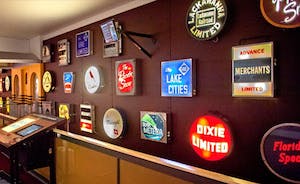 Prior to May 1971, when Amtrak® began to operate America’s passenger trains, individual railroads offered their own service. There was considerable competition between railroads with travelers having several trains to choose from between major cities.

The top trains, which often had names, offered by each railroad were heavily promoted. One device used to advertise and identify these trains was the drumhead – a round, illuminated sign bearing the train’s logo attached to the rear of the last car. The first drumheads were large and round, much like a bass drum – hence their name. 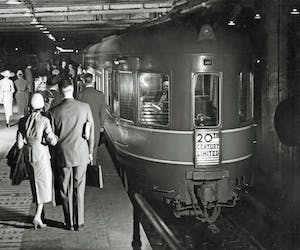 Drumheads generated powerful advertising. Celebrities often posed and had pictures taken near the signs. Those pictures promoted that particular train as a celebrity’s favorite train—which was essentially an endorsement of its service. The first drumhead was displayed on the Northern Pacific’s North Coast Limited in the early 1900s. The train ran between Chicago, Illinois, and Seattle and Portland, Oregon.

Among railroad memorabilia, drumheads are very rare items. Although hundreds of drumheads were manufactured, as few as a half dozen copies were made of some designs. Additionally, as trains were removed from service, the drumheads were scrapped along with unwanted passenger cars.

The Bauer Drumhead Collection is the largest gathering of such artifacts (40) known to exist. Frederick Bauer presented the collection to the National Railroad Museum®in 1999 to be preserved and displayed for future generations.