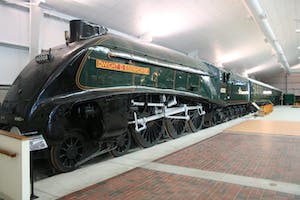 The National Railroad Museum is proud to have the only A4 Class locomotive in the United States. This British locomotive was renamed for Dwight D. Eisenhower after World War II. Along with this engine are two London and North Eastern Railroad cars that were converted for Eisenhower’s use during the war.

The National Railroad Museum® has completed restoration work on the London and Northeastern Railroad cars #1591 and #1592. These two passenger cars were converted for use on the two trains that were assigned to Eisenhower while in England. The #1591 was restored to look as it did post-war when it was donated to the museum. The #1592 is now complete with armor plating and it looks as it did during the war.