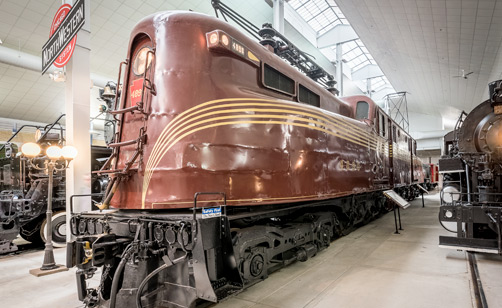 The GG-1, America’s most famous electric locomotive, was first built in 1932. It has had its streamlined body featured on a U.S. postage stamp, as a Lionel toy train, and in dozens of paintings over the years.

Designed to move passengers, and eventually freight, along Pennsylvania’s electrified lines between Washington D.C., New York, and Harrisburg, PA, the locomotives streamlining is what brought it fame.

The body was styled by industrial designer Raymond Lowey — the man who designed products and graphics for IBM, Coca-Cola, Shell Oil, and hundreds of other brands. There were 139 GG-1 locomotives built. Only 16 remain and four of them, including the one
at the National Railroad Museum, are preserved indoors.