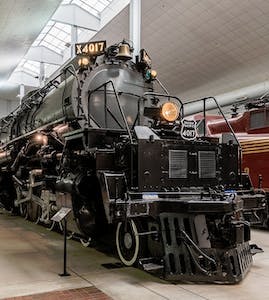 Weighing in at 1.1 million pounds and measuring nearly half a football field in length, the Big Boy locomotives were designed to haul heavy freight for the Union Pacific railroad over the mountainous regions of Utah and Wyoming.

Originally 25 of these giants were constructed from 1941-1944. They roamed the rails until 1959. Union Pacific donated eight of them to museums across the U.S. The Big Boy preserved at the National Railroad Museum®is the only one housed inside a climate-controlled facility.

Providing fuel and water to feed Big Boy was a major task. The 14-wheel tender was one of the largest built with a capacity for 32 tons of coal and 24,000 gallons of water.
When it was built, Big Boy’s tender was designed to carry 28 tons of coal. This was enough to fuel the locomotive while pulling a 3,600-ton train between Ogden and Echo, Utah: a distance of 55 mountainous miles. Union Pacific soon added steel coal boards around the top of the coal bunker to prevent spillage and increase capacity. With the boards, the tender could carry 32 tons of coal. The tenders on the first Big Boys (#4000 – #4019) carried 24,000 gallons of water. On the second-order (#4020 – #4024) water capacity
was increased to 25,000 gallons. 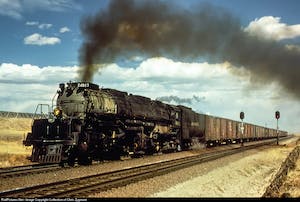 In addition to fuel and water, Big Boy’s tender carried other equipment. The stoker motor and firefighting equipment were located in lockers on the fireman’s (left) side. Lockers on the engineer’s (right) side held train signal controls and small tools.

The coaling tower was a busy place during the steam era. On the Union Pacific railroad, some coaling towers—like the one in Cheyenne—held up to a 650-ton supply and spanned four tracks. They also supplied sand to prevent locomotives from slipping on wet rails and when locomotives were getting started.

When a locomotive arrived at a coaling tower, its fire would be cleaned and ash pan emptied. The ashes and cinders fell into pits located between the rails. A conveyor system then loaded the waste into hopper cars. The cinders were dumped along the tracks as ballast.